After losing opponent Volkan Oezdemir this week to injury, Gustafsson has officially withdrawn from his August 4 date at UFC 227 as a result of a “minor injury.”Initially, it was believed that Anthony Smith will replace Volkan and the fight will be still on, but Gustafsson’s mysterious injury has put an end to that possibility as well. 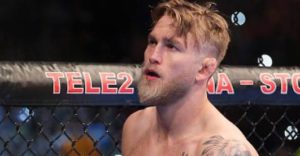 “Alex Gustafsson is out of UFC 227 with a minor injury. The injury occurred last week. Since that time, we have been working closely with the UFC doctors, our doctors in Sweden, and the experts at the UFC Performance Institute. We have been advised that Alex has a minor injury and he will not be permitted to compete at UFC 227″

Gustafsson’s management released a follow-up statement later. That statement can be read below.

Doctors pulled Alex from the card last Friday. Days before Anthony was to compete. Before that, we were trying to stay on the card. Assuming we could get cleared, we were prepared to face anyone. We assumed it would be Rountree as he was ready to fight, and we were told Jan would fight at another time. We also offered to fight DC at heavyweight if he was healthy. So Alex was prepared to face anyone, ranked or unranked. But the doctor’s said he was unfit to compete.

"It’s just a minor injury. It’s nothing serious. It’s just one of those things that you have to fix so you can do whatever you want to do. A couple of weeks more or less." Alexander Gustafsson to @arielhelwani.#HelwaniShow

While the authenticity of Gustafsson’s recent Injury and the answer to the question concerning, whether he is ducking Smith or not is debatable. The lightweight division does not have two of its biggest names in it anymore and it needs a new #1 contender real soon to bring back it’s old glory.

Listening to #HelwaniShow and @arielhelwani did NOT confirm Gus was hurt on Saturday like some are saying.Ariel asked Gus about the timing of the injury and Alex said he knew abt injury "..before. Before the fight.." 🤨 Any1 have evidence he announced injury b4 the smith fight??