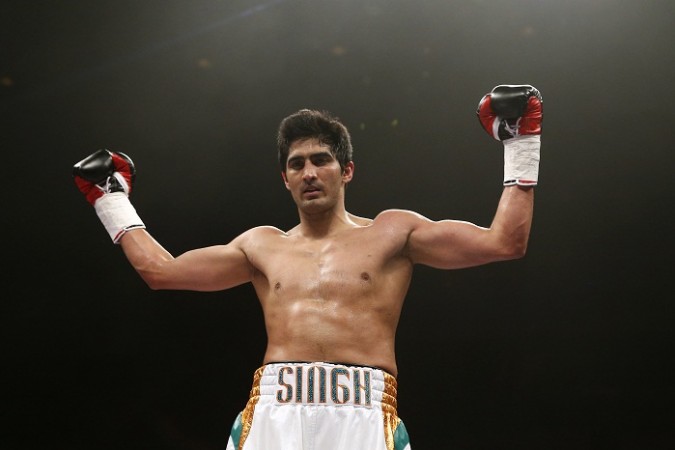 Vijender Singh has risen to No.6 in the WBO super middleweight rankings after recently beating African Champ Ernest Amuzu last month after defending his WBO Asia Pacific and Oriental super middleweight belts. He was No.10 previous to the fight.

Rumour has been that he will next fight for the Commonwealth belt.

After his win over Ernest Amuzu, Vijender has stated ,”Happy to end this year on a winning note. Now I will look forward to play at least two titles next year — Commonwealth and World title. I would like to thank the people of Jaipur for making this show a big success and thanks to all my fans across India for their support,”.

Vijender had also recently shown interest in fighting British-Pakistani boxer Amir Khan and bringing an end to their ongoing feud but Amir has shown no inclination towards the same and recently signed with Matchroom boxing and announced that he’ll be fighting in Liverpool,UK on April 21st.

. @amirkingkhan back to business! Full announcement on April 21st show at press conference in Liverpool next week 👌🏼 @SkySportsBoxing pic.twitter.com/u4TfeY4TNM

Back in business. I will fight on April 21st in Liverpool pic.twitter.com/UqgmCNwKmb

But getting back to Vijender, since the article is about him…he is looking at fixing a fight date in April as well (don’t even try putting two and two together) and all indications are it will be for the Commonwealth belt.

Previous articleGLORY 50 Chicago: Heavyweight Contender Tournament Preview
Next articleLove him or hate him, Conor McGregor has done a lot for the UFC