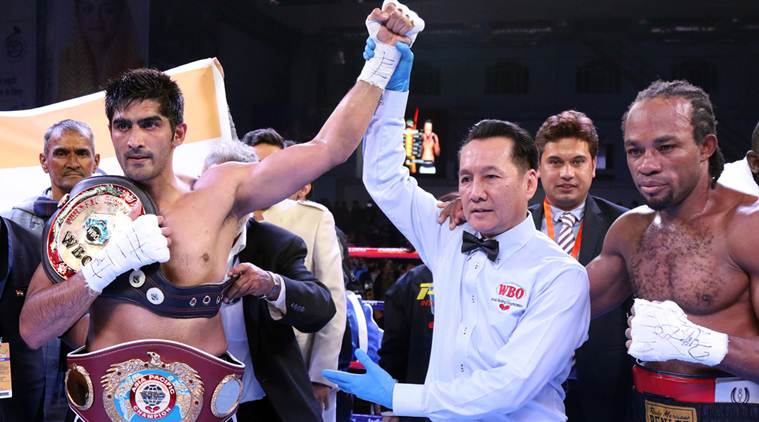 He now has his sights set on much bigger targets, namely the Commonwealth and World titles. The Commonwealth Super Middleweight title is currently held by Great Britain’s Luke Blackledge, a 27-year-old boxer with 23 wins, including eight knockouts, from 30 fights which is an impressive record by any standards and would be Vijender’s biggest challenge to date by far.

Vijender Singh spoke to the Quint about his fight with Ernest. “I am really happy on winning this fight. I know he was a tough fighter and that is why the fight continued till 10 rounds, but yes, I was sticking to the strategy planned by my coaches, and that helped me in winning this fight.” “I know he is quite low in ranking as compared to me. But one blow can decide the fight. He posed a challenge in the first two rounds and when I started dominating all of a sudden I sustained a deep cut on my forehead and for a moment it appeared that all was finished. I was shaken but fortunately there came a break, giving me the time to recoup again”.

Then Vijender addressed the Amir Khan fight, rumours of which have been going on for some time now with both fighters having exchanged barbs on twitter.

Vijender Singh’s promoter,Neerav Tomar, of IOS Boxing Promotions, confirmed that they were trying to make the Vijender-Amir fight happen, “We have seen such fights before – like between Mayweather and Pacquiao – then why a fight between Vijender and Amir cannot be arranged. In fact, we are working on it, and hopefully it will take place.” “Amir is 72 (kg) and presently Vijender is 76.2 and if he has to come down it can be tough for him. His trainer’s advice would be the deciding factor”.

Now this is a fight which would really propel combat sports in India. We’re waiting.