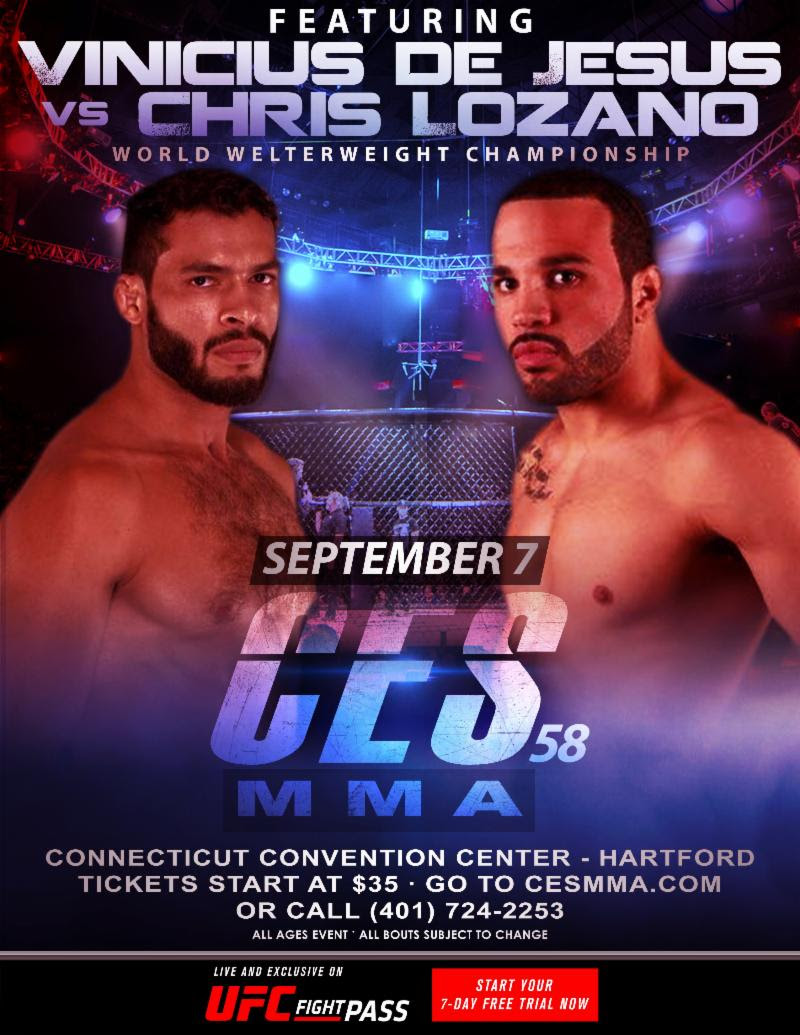 CES MMA welterweight champion Vinicius De Jesus is a mped-up to make his first title defense in the CES MMA 58 main event, Saturday night, September 7, against challenger Chris “The Cleveland Assassin” Lozano.
CES 58 will be streamed live from the Connecticut Convention Center in Hartford, exclusively on UFC FIGHT PASS®, the world’s leading digital subscription service for combat sports, beginning at 8 PM E.T. / 5 PM P.T.
Brazilian-born De Jesus, fighting out of Norwalk, CT, became CES MMA welterweight champion in his last fight (Mar. 29, 2019), when he earned a five-round unanimous decision over Jeremiah Wells. De Jesus has won three of four Bellator fights and he is riding a three-fight win streak.
The 29-year-old De Jesus, who started training at 13, moved from Brazil five years ago to Stamford, CT, and he is now living in nearby Norwalk. Back home, De Jesus was a chef, but now the only cooking he does in in the cage, teaching and training MMA students while competing on the World Stage. De Jesus has an impressive 8-2 pro record; both losses coming by way of split decision.
Most Brazilian fighters are, naturally, Jiu-Jitsu specialists, but De Jesus prefers being known as a heavy-handed striker established as an 8-0 amateur boxer in Brazil before switching to professional kickboxing and then to mixed martial arts.
“My opponents have made huge mistakes thinking I was a grappler,” De Jesus said. “I’ve been boxing my whole life, my father taught me during my childhood.” 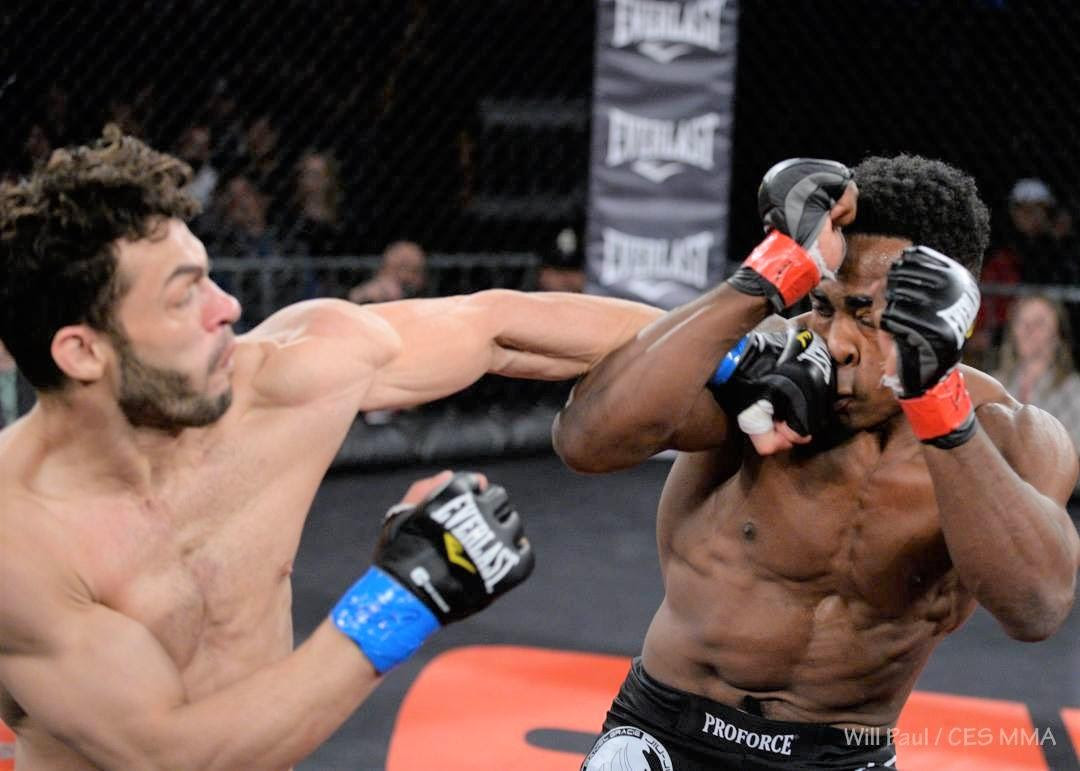 His frustrations with Bellator led to his CES MMA debut this past March. “I had an incredibly great feeling that I wasn’t being appreciated in Bellator,” De Jesus explained. “My four fights were on undercards and our negotiations to fight on the main card were hard. After my (Bellator) last win, CES contacted me to ask if I wanted to fight for its title, and we made a deal. My physicality and cardio were very good for that fight. Everything was right there. Winning the CES MMA World title on UFC FIGHT PASS opened up doors.”
De Jesus doesn’t know too much about his challenger, Cleveland fighter Lozano, other than he’s in the same weight class and experienced.
“Everything (training) is amplified for this fight.” De Jesus claimed. “Nobody is taking my belt away from me. I’m confident, but not overconfident, like some of my opponents were against me. I know what I’m doing, I’m getting proper rest and great sparring. The only thing that matters, though, is he will fall September 7th, whether it’s by a great knockout or unbelievable submission. This is my time!”
Local fan favorite, Hartford heavyweight Parker Porter, takes on veteran Brazilian opponent Dirlei “Mao de Pedra” Broenstrup in the co-featured event. Porter is coming off an impressive victory May 31 at CES MMA 56 in Hartford, when he defeated Kevin Ray Sears by locking in a kimura for second-round submission.
Popular Waterbury, CT lightweight Jesse James Kosakowski faces the toughest test of his young career against veteran Reggie Merriweather. Kosakowski is unbeaten in all three of his pro MMA fights, including an opening-round triumph at CES MMA 56, in which he submitted Ryan Jeff with an arm bar.
Springfield, MA middleweight prospect Pat Casey challenges Andre “Rumble” Hall. Casey has won two in a row since he suffered his only pro loss in seven pro career fights. Hall’s most recent fight came last month at CES MMA 57 where he stunned the crowd by submitting local fan favorite, Pat McCrohan in the first round.
Norwich, CT native, Pete “The Heat” Rogers, Jr. is being showcased versus the experienced “Relentless” Robbie Leroux, of Fall River, MA.
Also fighting on the undercard is Massachusetts bantamweight Harris Bonfiglio vs. Jornell Lugo, lightweight Nick Giuletti vs. Cody “Lightning” Schieve, Meriden,
CT flyweight Justin Valentin vs. Adrian Haly, and Granby, MA heavyweight Dan Randallvs. Jesse Baughman.
All fights and fighters are subject to change. This is an all ages event.
Tickets for “CES MMA 58” start at $35 and are available online at cesmma.com or by calling the CES box office at 401-724-2254.
Twin River Event Center doors open at 6:30 p.m. ET with the first fight scheduled to start at 7 p.m. ET.
The main card will stream live and exclusively on UFC FIGHT PASS. To sign up now