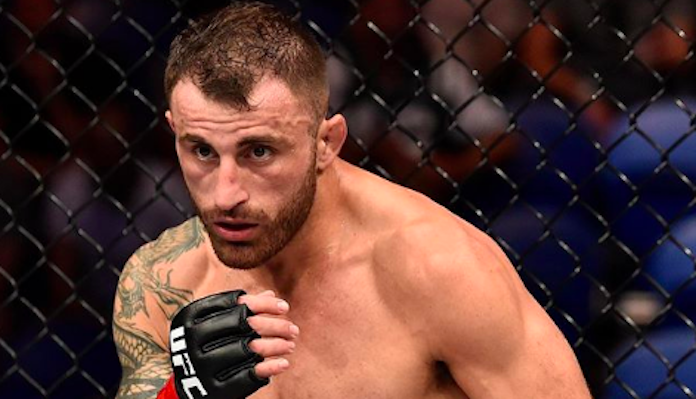 Alexander Volkanovski is on an absolute tear in the featherweight division. His most recent spoils over former long time champion Jose Aldo have brought him into the title picture in a big way. Despite that, it is Frankie Edgar who is getting the next title shot against Max Holloway.

After being sidelined for the shot, Volkanovski is staying in shape if either Edgar or Holloway pulls out. The Australian has a strong sense of self belief instilled in him. He appeared on MMA Fighting‘s The MMA Hour and talked about how he can be a bad matchup for the Hawaiian. As UFC is headed to Volkanovski’s homeland in Australia for UFC 243 , he expressed his desire to fight Holloway in his own backyard.

“I should get a fight with Max Holloway, definitely, 100 percent I deserve that title fight,” Volkanovski told host Luke Thomas. “He doesn’t want to fight in Australia, I guess he’s the champ, whatever. But he’s game, he knows the Australian fans will love him as well. Everybody knows that’s gonna be a cracker of a fight, so I don’t think it will be as hostile a crowd or something like he’d have to worry like it is in Rio, I think that would be a bit more crazy than it would be in Australia. I reckon he’d do it and we just need to make it happen.

“It would be a cracker of a fight and I’m sure the world wants to see it.”

Holloway’s volume punching has always been a  major issue for his opponents. It was the same fighting style that allowed him to toy with Brian Ortega in his last title defense at 145 pounds. However, the same strategy failed miserably against Dustin Poirier whose power punching overcame Holloway’s volume. The Aussie seams to have taken a leaf out of Poirier’s playbook in order to devise a strategy to defeat Holloway.

“I just still fight my fight,” Volkanovski said when asked how he’d beat Holloway. “Look, he’s a gamer, he comes forward, he does a lot of the work for me. That’s why I’m a bad matchup for him, I really do believe that.”

While Volkanovski has a plan in mind to defeat Holloway, he still doesn’t undermine the strength of the champ. He fully understands that despite losing at 155 pounds to a bigger opponent, 145 is still Holloway’s backyard.

“I always knew that he could be beat,”  Volkanovski said. “I always knew that I was a bad matchup for him. It was probably better for everyone else to realize that he’s not invincible, everyone thought he was just unstoppable, which I don’t blame them, obviously he’s looked really good, much respect to him.”

“But at the same time, I knew he wasn’t invincible, that just showed and let’s be realistic, I’ve got cardio for days and I will not gas and I will be powerful the whole time, so I’m a very, very bad matchup for him I believe.”

Holloway is set to fight Frankie Edgar at UFC 240 on 28th July. The outcome kept aside, it will be difficult for Holloway to make a turnaround in less than 3 months to fight Volkanovski in Australia. Nonetheless, Alexander is keeping his hopes high and preparing for the best and the worst.

Alexander Volkanovski staying in shape to serve as a replacement in UFC 240 main event, if needed