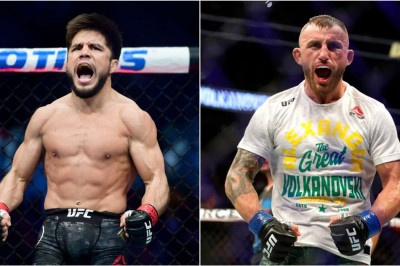 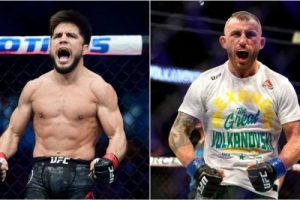 Ever since Henry Cejudo announced his retirement after defeating Dominick Cruz, he has never stopped initiating beef and calling out people on social media. He has successfully set the stage for a massive comeback, be it in any division. Probable fights that make sense for him are against Petr Yan, Cody Garbrandt, or Alexander Volkanovski. While he has already been a champion at Flyweight and Bantamweight, a fight against Volkanovski would give him the chance to win gold at three divisions, something that has never been done in the sport before.

For similar reasons, he has called out Alex on several occasions on twitter, and the two have gone back and forth before any official announcement of the fight. Henry has gone so far as to giving himself the title of “C4”, letting people know that he is eyeing on another gold.

Alexander Volkanovski has dominated the division for a long time now, after notable wins over fighters like Max Holloway, Jose Aldo, and Chad Mendes. His last fight was a close call, with some people saying Max was robbed of the title, which is still arguable. While talks of a third fight are set aside, Alex has some potential fights in Zabit, Yair, Brian Ortega and TKZ. With so many potential opponents, a fight against Henry would still be very exciting, given the fact that it is Henry’s only run for the featherweight belt.

Volkanovski denies being approached for the fight

Despite the hype, it seems the UFC is not considering the fight, as Alex denies being approached for it.

“It’s funny, I have a laugh about it, but I don’t know how people are taking it, if they really think that I’m not signing some contract that supposedly I’m meant to sign,” Volkanovski told MMA Junkie. “No one has talked to me about this at all, except Cejudo. I just keep seeing him begging, absolutely begging Dana White to give him a shot.”

“It’s the cringe, what are you going to do? If it was going to ever happen, it had to be before. Now look at the division. We got all these guys that are fighting for the No. 1 contender (spot). For me to take a fight later this year with Cejudo, it just does not make sense. Again, I want them No. 1 contenders, but if the UFC just really did push that on me, alright fine. I’ll whoop his ass then I can take on a No. 1 contender. But again, that’s not me. I want to be the type of champion that takes on No. 1 contenders.”

Previous articleUFC News: Paulo Costa receives a visit from USADA ahead of UFC 253
Next articleHenry Cejudo has some respect for Sean O’Malley: ‘I actually like the kid’