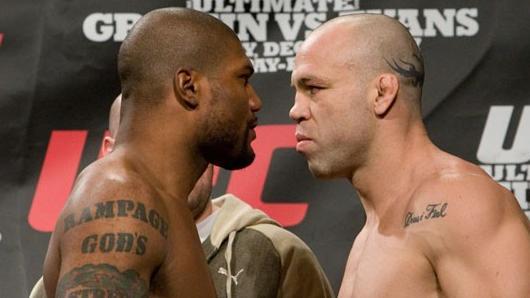 The rivalry between Wanderlei Silva and Quinton ‘Rampage’ Jackson is back under the spotlight once again thanks to Jackson’s recent comments on The MMA Hour.

Jackson, who won the last fight between the two, predicted “another ass whooping” against the Brazilian if a fourth fight happens.

And now, Silva has hit back and revealed that he is ready to fight the former UFC Light Heavyweight champion for the fourth time. The Brazilian, however, has one condition.

”I will (talk to Bellator president Scott Coker), but I want to do this rematch with ‘Rampage’ at Arena da Baixada, in Curitiba. I’ll put this as a condition, to be in my hometown. Then it would be worth the effort. Money alone isn’t worth it, it has to be something more, and that would be fighting in front of my friends in Curitiba,” Silva said in an interview with MMA Fighting.

Silva also went on to add that he has already talked to the Atletico Paranaense officials and that they are open to hosting a Bellator event.

Silva and Jackson have fought three times. Their first two fights happened in PRIDE with Silva winning both. Jackson, however, got one back at the UFC 92 to make it 2-1.

Previous articleDominick Cruz wants the title fight next, calls out TJ Dillashaw
Next articleDana White has only one condition for the McGregor – Mayweather rematch