Watch: 4 years on, a look back at Conor McGregor’s entrance at UFC 189 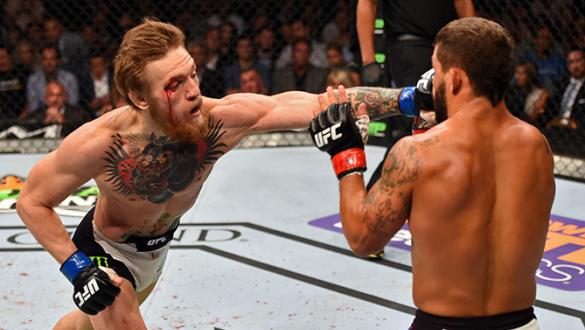 There was a time when Conor McGregor became synonymous with not just the UFC, but with mixed martial arts all together. And when such a personality transcends the sport, it is sure to leave a lasting impact in the minds of the viewers.

It was 4 years ago from this very date that Conor first held UFC gold around his waist. When an initial bid to fight the then undefeated Aldo failed, Conor had to settle for an interim title shot against Chad Mendes. While the fight itself was another story, what stood out was Conor’s walk to the Octagon.

McGregor somehow managed to convince Dana White to allow Sinead O’Connor to sing during his walkout. And what followed next will be indelibly etched in the minds of 17,000 fans packed into the Las Vegas arena.

When Sinead’s powerful voice mixed with Conor’s persona, it made up for a mix tape of highlight reels to follow for the years. We take a look back at how the entire scenario unfolded. And this video is bound to take you back in time and make you reminiscent of the day and age of ‘Mystic Mac’.

"Rang out through the foggy dew…" 🎶

4 years on from Conor McGregor beating Chad Mendes at UFC 189 and his walkout with Sinead O'Connor still gives us goosebumps 🙏pic.twitter.com/9SHCjhRGpN

McGregor had his first big test entering into the fight. Everybody was discussing how a striker in McGregor would hold up against a wrestler in Chad Mendes. Despite facing adversity, Conor knocked out Mendes with a looping left near the end of round 2.

While we sit back and look back at this moment it is not possible but to help wonder where the career of the Irish megastar is headed. Having contemplated retirement multiple times, only he knows whether he will step foot inside the Octagon or not. But one thing is clear. Despite his in ring fallacies and the occasional erratic behavior out of it, McGregor will always be an ideal for anyone who wants to market himself as well as an upcoming sport.