Watch: BJ Penn eggs on opponent in street fight; gets knocked out cold! 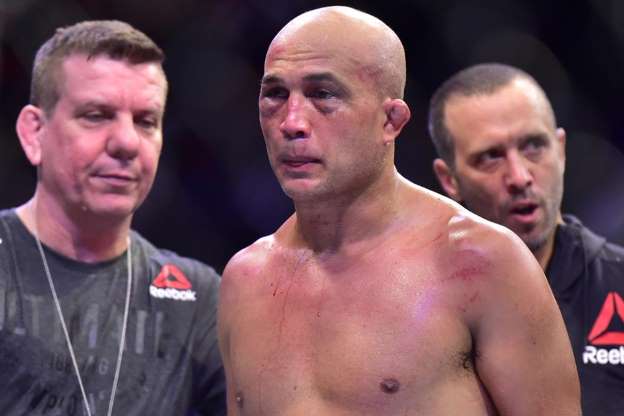 UFC Hall of Famer BJ Penn has been losing for quite a while inside the UFC Octagon. However, no one would have expected the former two division UFC champ to get knocked out by a stranger in a street fight.

A video surfaced on Wednesday where Penn was seen engaging in a fist fight with fellow patron at Lava Shack in Pahoa, Hawaii. The first video released showed Penn with back mount on the man in the street. The former was landing punches to the larger man’s head. Later in the day, another video was released. This one showed the man hitting Penn with a two-punch combo in the street. Penn seemed to be knocked out following the blow.

A representative for Penn released a brief statement on the issue.

“Upon meeting friends for a concert at the Lava Shack, words were exchanged between BJ and the acquaintance,” the rep said. “From witness accounts, BJ tried multiple times to defuse the situation, but was hit repeatedly and knocked to the ground, as seen on the video. When he got back up he was disoriented, yet realized how serious the situation and threat was and felt there was a need to defend himself.  We are thankful that BJ nor the acquaintance were not seriously injured.”

Being in the news for not the right reasons isn’t something new for Penn. In October 2018, he received a restraining order from his estranged partner after an alleged decade of abusive behavior and more recent death threats and cocaine usage. The restraining order was extended three years in February.

He was also recently involved in another street fight back in June at a strip club in Oahu, a month after his most recent Octagon loss against Clay Guida at UFC 237 on May 11.