Watch: Cowboy Cerrone passionately bats for Tony Ferguson to get next title shot at LW 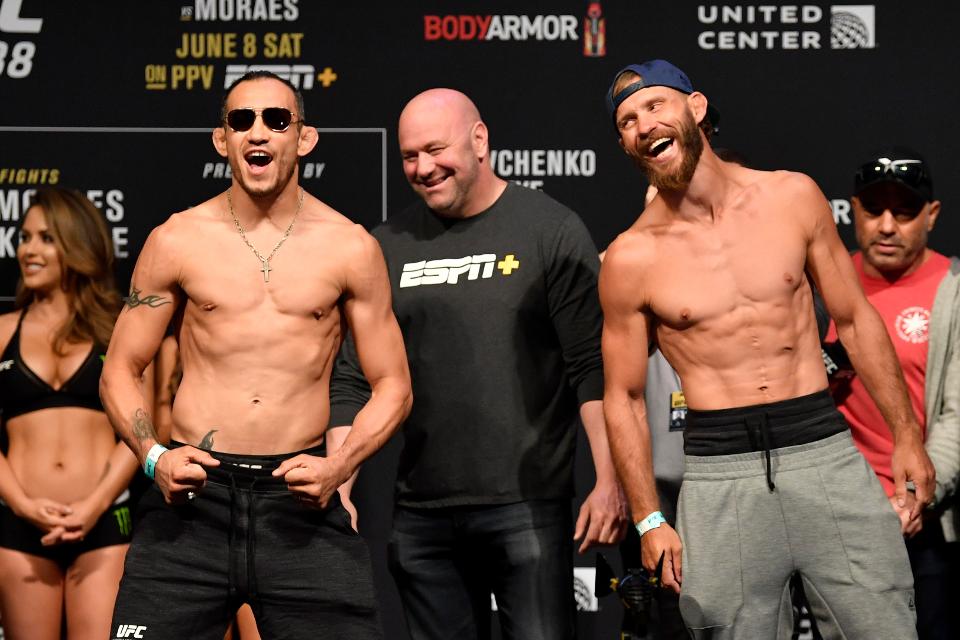 Donald Cerrone didn’t leave the Octagon with a very good face after his fight with Tony Ferguson. Cowboy, however, doesn’t carry the burn of that with him.

Their last bout ended in controversial fashion due to a strike after the bell. The demand for a rematch by Cerrone was absolutely justified. However, with his next looming over him, it seems that he has moved on form Ferguson.

“Hell yeah, man! Give the dude his dues,” Cerrone told reporters at an open workout for his UFC on ESPN+ 16 headliner opposite Justin Gaethje on Saturday at Rogers Arena.

The idea of Conor McGregor getting a shot ahead of Ferguson only led to Cowboy shaking his head in disbelief. Dana has said that the ex-interim champ will face undisputed champ Khabib Nurmagomedov next, but only if he accepts the offer. Otherwise, the fight may land in Conor’s pocket.

.@CowboyCerrone is all of us when discussing the possibility of @TonyFergusonXT getting skipped over for a title shot. 😂 #UFCVancouver pic.twitter.com/o6kRCznQpK

“That would be tough for Tony to swallow,” Cerrone said. “No, (Ferguson) deserves it. For sure.”

At this point everyone, except two people, believes that Khabib Nurmagomedov vs. Tony Ferguson is the fight to make at 155 lbs. The couple of opposing the idea are McGregor and Nurmagomedov’s manager, Ali Abdelaziz, who wants his client to face off with Georges St. Pierre.