Watch: Derrick Lewis brutally flatlines a boxer who claimed he could KO him because he was a MMA fighter

Former heavyweight title challenger Derrick Lewis is one of the hardest hitting heavyweights in the UFC and it’s one of the reason it’s not advisable to indulge in trash talk with him unless you can back it up.

An incident took place at Lewis’ gym where a boxer was talking smack about MMA fighters and that boxers were better than them. This angered Lewis and he got into the ring with him. 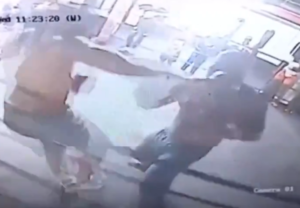 The fight didn’t last long as Derrick Lewis brutally knocked out the boxer inside a minute.

When a boxers said he will knock me out because I’m a mma fighter pic.twitter.com/EjSeudMeQM

“When a boxers said he will knock me out because I’m a mma fighter.” Lewis tweeted the video.

Ariel Helwani of ESPN reached out to Derrick Lewis for further details.

Asked Derrick about this.

He said a boxer at his gym was talking “a lot” of smack about boxers vs MMA fighters. This happened yesterday. Lasted 1 minute, he said. https://t.co/K7R49cq2iF

“Asked Derrick about this. He said a boxer at his gym was talking “a lot” of smack about boxers vs MMA fighters. This happened yesterday. Lasted 1 minute, he said,” Ariel Helwani tweeted.

Derrick Lewis is already in training camp as he is set to return to the Octagon on Feb 7 at UFC 247 against Ilir Latifi. UFC 247 is taking place in Houston, Texas and is Lewis’ hometown. However, Lewis is confused about UFC’s decision to match him against Latifi.

“It was a real surprise that they chose Latifi because I believe that he was a small 205-er. And, for anything, he should have went down to 185 instead of coming up to heavyweight,” Lewis said during a media day event at UFC 245. “And I heard that he had called me out, and wanted to fight me. So it was a real surprise to me, that he wanted to pick the biggest guy in the division. Like the fattest guy in the division.” Lewis said. (H/T – mmanews.com)

Previous articleHenry Cejudo plots 135 title defence in the first half of 2020 pending recovery from shoulder surgery
Next articleFriday Fighter of the Week: Anshul Jubli