Watch: Gina Carano reveals ugly Dana White text message about her: ‘This b**ch is f***ing us around!’

Over a decade ago, women’s MMA wasn’t as huge as it is now. If anyone deserves credit for the huge surge in popularity of women’s MMA it goes to Gina Carano. 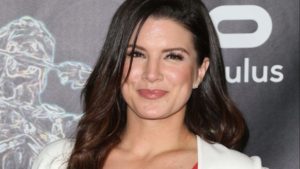 It was also Gina’s last fight as a professional. Over the years the fans have wanted to see her compete in the Ultimate Fighting Championship against the likes of Ronda Rousey, Miesha Tate etc.

Last night Gina made an appearance on Ariel Helwani’s MMA Show, where she revealed that she almost made her Octagon return against Ronda Rousey.

“When Ronda Rousey became popular, I remember they finally called for a meeting and I walked into this restaurant, and they looked like two big muscular guys at the table in the middle of Hollywood and I remember thinking, ‘What took you guys so long?’” Carano said.

“So they were like, ‘Okay, we’d love to offer you a million dollars to have that fight (against Ronda Rousey).’” And I was like, ‘Well that sounds great, but I am going to need you to do me a favour because I have been acting now and I’m not active in any gym, so you are going to have to give me some time to build a team or join a team.’ Which is not an easy thing as all fighters know.”

Around that time, Gina Carano was busy with her film career and up to that point she had already made her appearance on Haywire and Fast and Furious 6. However, UFC president Dana White didn’t want to give her much time and they wanted her to fight Ronda Rousey much sooner, which ultimately lead to her falling out with UFC.

“… It was a nice dinner and we all left positive. I left stoked. Okay, this makes sense. This is my moment,” she added. “And then, the next day Dana was out there talking about me, talking about my name, telling people that they were going to sign me. And I don’t even have a team yet. I was like ‘that’s not what we discussed. You were supposed to give me at least six months to find a team.’ And then he started trying to put on the pressure through the media.

“It was a bummer because I told him over a text message that’s not what we talked about. I need time. … Then, he kept on doing that. I was still kind of searching for a team and feeling all that pressure. And then he sent me a text message that said, ‘this b*tch is something effing us around.’ I sent a text message back saying I think you sent that to the wrong person. And he said I don’t think I did. And that was the last conversation we had over a text message. Because I don’t think that was the kind of environment I wanted to come back into. So I just cut all communication after that text.” (H/T – MMA Mania)

Previous article
UFC negotiating to have Khabib vs Tony Ferguson headline April 18 card in Brooklyn, New York
Next article
Dustin Poirier wants to fight either Conor or Nate on the Khabib vs Tony card