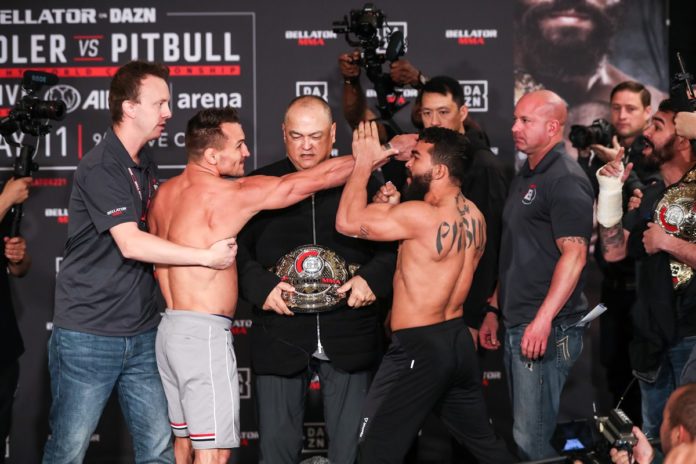 Michael Chandler vs Patricio “Pitbull” Freire checks all the boxes for being a bad blood match up. And the scenes at the pre fight weigh ins were a proof of the same.  Bellator 221 has the potential to not just be the best card in the organisation’s history, but is also capable of being compared to a good UFC card. What makes it this good is the underlying story line of the main event.

Michael Chandler is the current Bellator lightweight champion. Among the list of the seven opponents that he has defeated over the course of his last eight fights, is the name of  Freire’s brother, Patricky. After his brother’s loss, Patricio and Chandler have had quite a  number of altercations online. And hence “Pitbull” will look to end the matters in the best possible way – by defeating Chandler inside the Octagon.

However, “Pitbull” has got eyes set on personal glory as well. Being the featherweight champion himself, he will be attempting to become the first double champ in the history of he organisation. Company president Scott Coker would be thanking the MMA gods for giving the event such a perfect backdrop.

At the weigh ins both the fighters energies resonated the history between. Take a look at it yourself:

They settle it in the cage Saturday night on DAZN 🏆 🆚 🏆 pic.twitter.com/GAtUwc2Q6e

Along with this cracker of a contest, the card also features one of the best stylistic matches when Douglas Lima goes up against Michael “Venom” Page in the World Welterweight Grand Prix semifinal.

Previous articleUFC: Jose Aldo wants the title this year so he can take 2020 off
Next articleUFC 237 ‘Namajunas vs. Andrade’ – Play by Pay Updates & LIVE Results