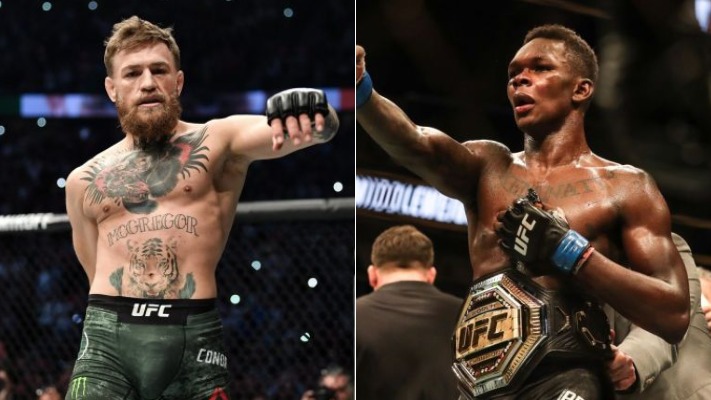 Conor McGregor shocked and impressed everyone with his return to the Octagon. His forty second knockout of Donald Cerrone made a lot of people jump out of their seats. And that includes current middleweight kingpin Israel Adesanya.

Adesanya had previously applauded McGregor’s performance in an interview with ESPN, calling him a gangster. A video shared on YouTube and other social media platforms show the real time reaction that the Nigerian born Kiwi fighter had after watching ‘The Notorious One” script history by becoming the only fighter to have knockout victories in three separate weight classes.

While Conor made his way inside the Octagon, Adesanya was appreciative of the fact that the former had bought in much needed eyes to the sport. “He brought a lot of attention to our game, at a time when it needed it, and now I’m about to do the same,” Adesanya said before the fight. The 185 pound champ seemed confident in his ability to bring attention towards his fights as well. When a person asked him if he was going to bring in the “Conor McGregor numbers” to the sport, he replied, “I’m gonna bring in Israel Adesanya numbers”.

When the fight started, Adesanya was lying down. However, it didn’t took him long to sit back up after watching Conor’s barrage of shoulders in the clinch and the high kick that was the beginning of the end.

Israel is set to defend his belt against Yoel Romero at UFC 248. Romero is one of the very few fighters who will receive a title shot after losing his past two fights. However, his past two title shots have been very close and could have gone either way. Also the unavailability of No. 1 contender Paulo Costa is also a contributing factor in Romero getting the title shot.

Conor McGregor, on the other hand, is full of opportunities of fights against potential opponents. A rematch against his nemesis Khabib Nurmagomedov is what seems good for the boss, Dana White. But for that we’ll have to wait untill Khabib defends his belt against Tony Ferguson in April. ‘The Mystic Mac’ also has two exciting options at welterweight. One of them would be to challenge Jorge Masvidal for the BMF belt and the other one would be a trilogy fight against Nate Diaz.