Watch: Jack Hermansson confesses that he has a ‘I Love MMA’ tattoo on his butt 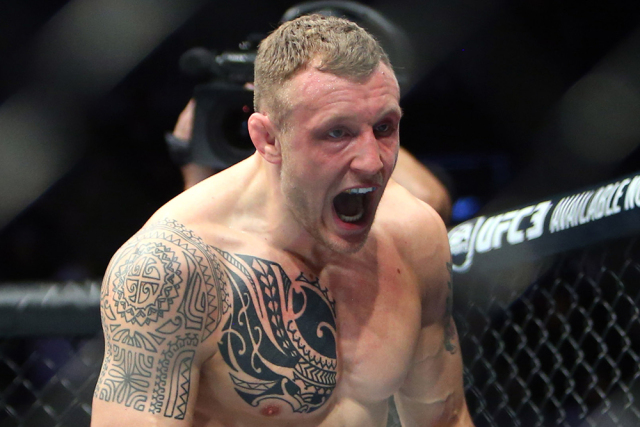 Jack Hermansson is the current Mixed Martial Arts fighter who has won the hearts and the minds of the MMA faithful. At UFC Fight Night 150, Hermansson pulled off the unthinkable in the main event. After entering the fight as a last minute replacement for Yoel Romero, Jack Hermansson was able to defeat Ronaldo ‘Jacare’ Souza via a Unanimous Decision.

The victory was his second, as he was coming off a victory over David Branch, whom he defeated via Submission only a couple of weeks back.

Now, in the focus on the MMA faithful, Jack Hermansson went on Ariel Helwani’s MMA Show to talk about himself. Ariel Helwani had a personal question for Hermansson, which was confirmed by the fighter.

“It’s true! I have a tattoo on my buttocks. I have an ‘I love MMA’ tattooed on my butt.”

When Helwani asked the reason for this tattoo, Jack Hermansson had a crazy story of how he got the tattoo without any prior planning.

“My brother has a tattoo studio. He is a tattoo artist. Before he had his tattoo studio, he was tattooing at home. He was supposed to write something for me, but he didn’t have the right size on the needle. So he was like ‘Ah man! We have to write something else’. I was like ‘Ah what are we going to do?’ So I came up with an idea of ‘I love MMA’, but I was not sure I wanted it where anybody could see it, so I got it on my butt.”

Jack Hermansson clearly loves MMA, and he is quite good at it as well. It will be interesting to see how Hermansson proceeds with his MMA career after two impressive back-to-back wins.

Jack Hermansson has an “I ❤️ MMA” tattoo on his butt. True story.