Despite all of this Cowboy Cerrone is one of the most accomplished fighters in the UFC even if he has never held a UFC title. He has won 23 fights in the UFC, which is a record for the most victories in the organisation. 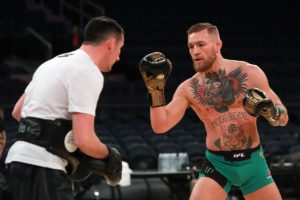 UFC fighters like Jon Jones, Kamaru Usman, Max Holloway, Alexander Volkanovski and others gave their thoughts on this match-up in interviews with BT Sport.

“Cowboy Cerrone and I have always had somewhat of a connection, and I am pulling for him.”

“…And at the same time, Conor McGregor, I love everything that he is doing for the sport. Such a great businessman. And he’s got so much awareness about the sport.”

“I see a lot of people riding Cowboy off like he is mister wash. Because he’s won some and lost some. But Cowboy is a very dangerous fight for Conor. And you know I think in a bit of a Conor kind of underestimated him in a sense.

“I know Conor is a professional, and he’s gonna come prepared, but you know he’s underestimated an opponent before, and he paid for it. I think in a sense, he’s kind of underestimated Cowboy. And you have seen before when you light a fire in Cowboy, he’s gonna get going. So I think it’s a good good good fight but I am expecting Cowboy to respond.”

“I will say Conor will take that one out. I think, look I have got a lot of respect for Cowboy, but I think it’s a good match-up for Conor. I think Conor finds that chin.” (H/T – SPORT BIBLE)

Here’s what other fighters think about Conor vs Cowboy match-up: