Kamaru Usman is coming off of an impressive fifth-round TKO victory over arch-rival Colby Covington in the main event of UFC 245, which took place at the T-Mobile Arena in Las Vegas. Following his win, he was asked if he would like to defend his title against BMF champion Jorge Masvidal.

Usman replied by simply stating: “WHO?“.

It’s safe to say, Jorge Masvidal didn’t appreciate what Kamaru Usman had to say about him and he made it known in a youtube diss video. 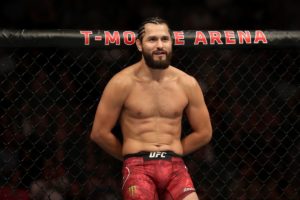 In the video, Kamaru Usman was seen talking to Joe Rogan about the time, when Masvidal punched Leon Edwards backstage following his TKO victory over Darren Till at UFC London.

Then the video showed the instances where Kamaru Usman admitted to liking Masvidal and paying him his dues and the reaction he made when Masvidal knocked out Ben Askren in just six-seconds at UFC 239.

With that being said, Masvidal recently made an appearance on Fansided’s Mark Carman show, where he said that he was going to break Kamaru Usman’s face.

“I’m gonna take him to school, drop him off. I’m gonna pick him back up, put him on the bus. Take his ass home. That’s exactly what I’m gonna do to that guy.

“He can’t hang with me. He’s too one-dimensional, he’s not skilled. And he sure as hell ain’t tough. He doesn’t have that next-level grit in him.”

“The plan is Conor, Usman, Mayweather, whichever one of those falls in line and how they fall in line, that’s our plan,” he added. “I love to compete, I love to fight.” Masvidal said. (H/T – SCMP.com)

Who do you guys think wins in a fight between Kamaru Usman and Jorge Masvidal?