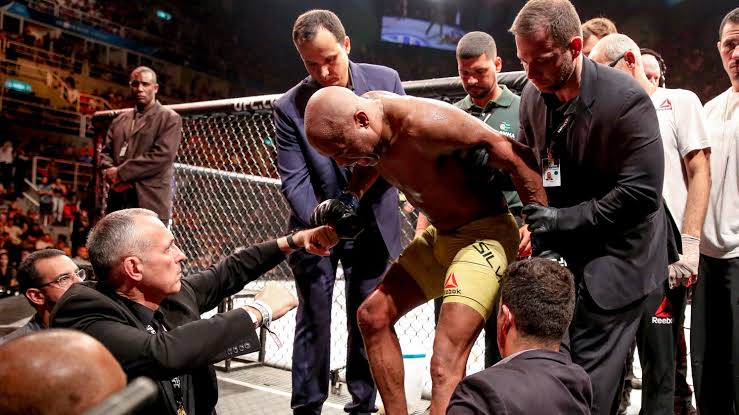 In a perfect world, Anderson Silva would have had the perfect twilight years of his career which would be reminiscent of his prime years inside the Octagon. However, the harsh reality of life is that the legend is now 1-4 in his last five fights.

This past Saturday, Silva succumbed at the hands of Jared Cannonier. At the end of the very first round Cannonier threw an inside leg kick that buckled Silva’s knees. “The Spider” was in visibly agonising pain and referee Herb Dean had to quickly intervene.

Silva’s former opponent and former middleweight champion Michael Bisping thinks it’s now time for the 44 year old to hang up his gloves once and for all.

“Anderson Silva is a true legend of the sport – he’s given so much,” Bisping said on the UFC 237 post-fight show on ESPN+. (He was) a longtime champion, but he’s 44 years old. A lot of people wondered, ‘Why is he still fighting?’ I think tonight, even though he looked OK, the fight obviously ended. He took a little inside leg kick and I think that he tore his ACL. I don’t think we’ll ever see Anderson Silva fight again. He certainly doesn’t need to.”

Both legends of the sport, Bisping and Silva met at UFC Fight Night 84 in a five round war that saw Bisping take away the unanimous decision victory.

Bisping, who himself retired following a loss to Kelvin Gastelum, thinks time has finally caught up with Anderson.

“Father Time has caught up (with him),” Bisping said. “With the greatest of respect, Anderson Silva needs to retire. He’s already given so much to this sport. He doesn’t need to give anymore. Enjoy retirement.”