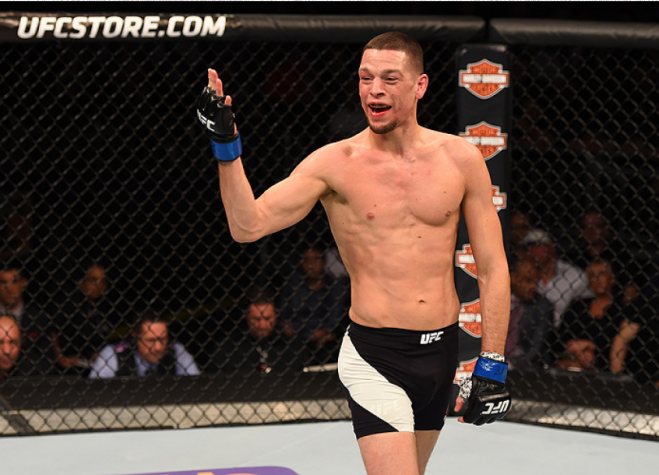 Nate Diaz on his return today to the octagon after a really long three year sabbatical from fighting defeated and outclassed former UFC lightweight champion Anthony Pettis in a lightweight bout with relative ease. After his victory in the post-fight interview, he had called out popular fan favourite UFC welterweight Jorge Masvidal. Diaz later after the event at ESPN again made a strong case to fight Masvidal and also reacted to his win over Pettis. 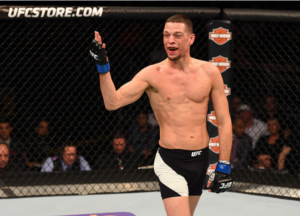 Diaz told Chael Sonnen, Henry Cejudo and Jon Anik that he realised Pettis was slowly fading out of the fight and that he just had to keep pressuring and keep the pace up. He also revealed why he wants to fight Masvidal. Here’s what he had to say:

Yeah, I felt him a little up and down (that Pettis was fading), but I felt like I had to take him down a little bit and then take him apart, but then I also felt like a fifteen-minute fight was not big enough for it. When he was breaking down a little bit, I just kept the pace and never stopped. I feel like if I had just eased up and stop a little bit then I still could have turned up when it was the time to, but I also still felt that I did not have enough time for that if the makes sense.

I have been in the UFC for a long time. I was here before even Jon Jones got here. I recognize that Masvidal has been in the game longer than even me and I can appreciate that. I don’t know him but it’s like I wanna fight everybody.

Has recent fatherhood changed Nate Diaz? He’s been one for years it would seem!

Previous articleUFC: Anthony Pettis reacts immediately to his UFC 241 loss against Nate Diaz
Next articleGermaine de Randamie steps up to challenge Amanda Nunes for the BW crown at UFC 245