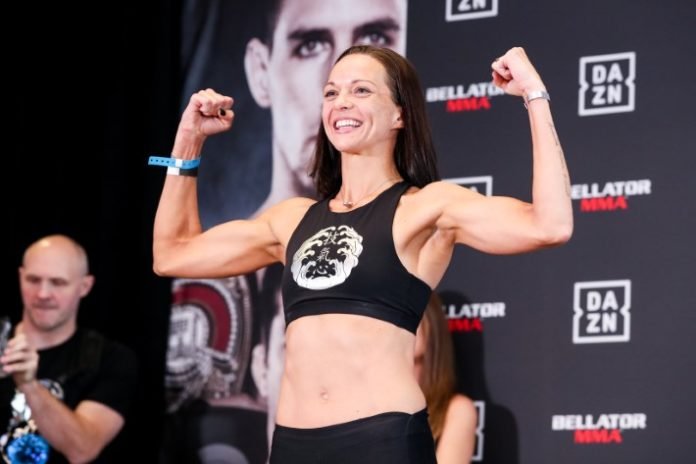 Last Friday at Bellator 222, Heather Hardy (2-2 MMA, 2-2 BMMA) faced off against Taylor Turner. However, Tennessee’s Taylor Turner was quick to put an end to that in a dominating way by knocker her opponent out in the first round.

Heather Hardy may soon be forced back into boxing, as Taylor Turner (4-5) swamps the popular pugilist with ground n' pound. The 36-year-old Turner has finished each of her wins and stopped three straight in round one. #Bellator222 pic.twitter.com/5KpT7ibQpV

In the post-fight scrim, Turner mentioned that this is basically “heaven” and she is extremely happy with the decision. She also had nice words for her opponent.

You can watch the full interview down below :

It didn’t take long for Turner to flatten Hardy out, but Turner seemed content to continue punching rather than pursue a rear-naked choke. Hardy returned to her back, but Turner was controlling her arm, landing shots to the face with her other hand. Pulling her arm free, Hardy covered up, but Turner retained the high mount, and Hardy looked helpless. Hardy was doing little more than covering up, while the ref urged her to get out — which she clearly was unable to manage. A final call by the ref for Hardy to fight back went unanswered, and an elbow by Turner sealed the deal, as she earned the first round TKO.

Taylor Turner looked optimistic for the future and she is more determined to be better and stronger.