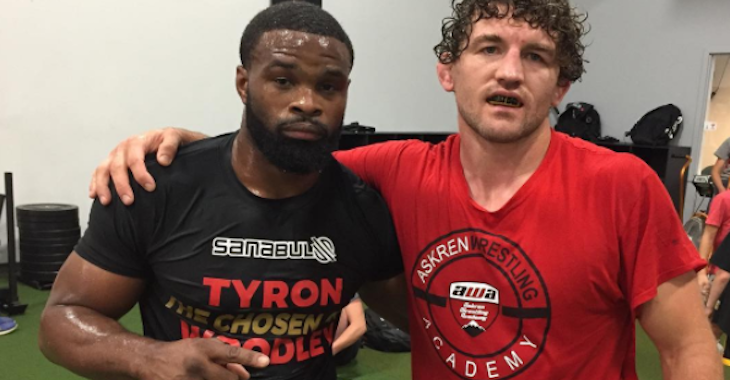 Ben Askren and Tyron Woodley were on Ariel Helwani’s MMA Show recently on ESPN, where they talked about their new show. Tyron Woodley revealed that the show was going to be named Flip Flops and Drop Tops. The entire segment was hilarious, with these two friends having obvious chemistry with each other.

During the announcement, to Askren and Helwani’s amazement, it appeared that Tyron Woodley was getting a hair cut. Ben Askren also revealed that he too had gotten a hair cut.

They had a lot of fun on the show, while Ariel Helwani commented on how it was the first time in his many years that a fighter was getting a haircut in the middle of his show.

Woodley said that there might be others who sit with an excel sheet and professional with a logo in the background, but he was getting a haircut, and continued to tease his new show with Ben Askren — Flip Flops and Drop Tops.

Ben Askren is coming off a win over Robbie Lawler recently, in his UFC debut fight. Woodley lost against Kamaru Usman thereby losing his title, but is now set to take on Robbie Lawler in the near future. The fight is set for the 29th of June, on the UFC on ESPN 4 show. Further details of their show will come out with time as well.