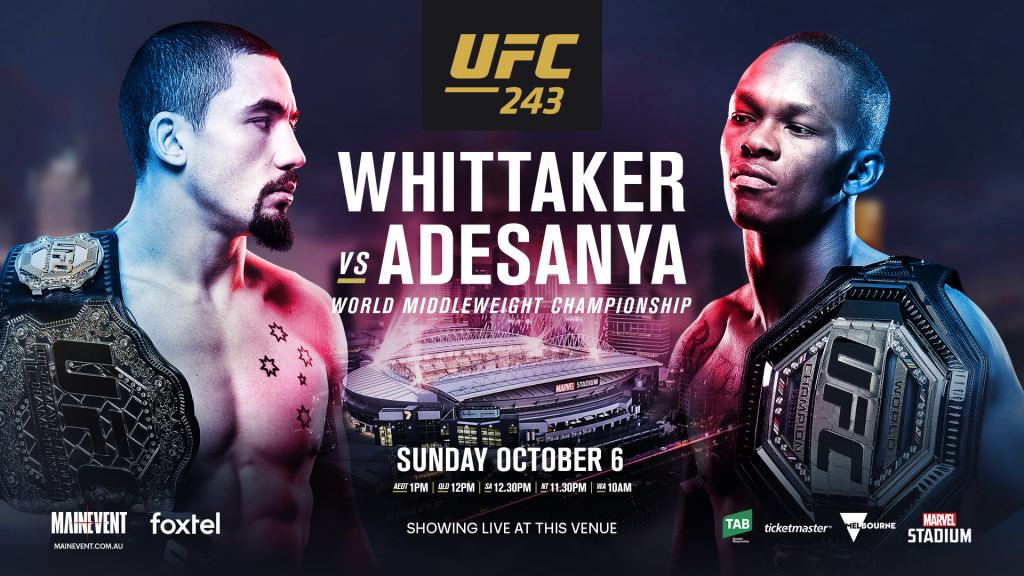 After the action-packed weekend in Mexico, where Cannonier took over Hermansson in the middleweight main event, UFC is now all geared up for UFC 243 at the Marvel stadium in Australia. The main event will feature a middleweight title unification bout as Robert Whittaker, the current middleweight champion will face his old-time

nemesis and the current interim middleweight champion, Israel Adesanya. To add on to the electrifying main event, the co-main event will showcase lightweight division contenders Al Iaquinta and Dan Hooker who are all set to punch and grapple their path to the top of the Lightweight division.

It’s finally time for UFC 243 where the critics have reviewed it to be another promising fight of the year. The roster this time spreads out at one extreme with Robert Whittaker-the fighter with lightning fast hands facing Israel Adesanya, the sublime striker with quick maneuvers, known for his sniper-like accuracy, which we haven’t seen since the days of Anderson Silva in his prime.

Since moving to 185 pounds, Robert Whittaker has been phenomenal and has remained undefeated at the same time. With nine straight wins, including victories over Kelvin Gastelum, Yoel Romero, Ronaldo “Jacare” Souza and Derek Brunson, Robert is a devastating striker with knockout power in every limb. Along with amazing striking power, he has also shown incredible takedown defense while going up against some elite wrestlers in his career. Coming out of the injuries, illnesses and raising his concern over mental health, the current champions toughness and heart have never been in doubt as he is set to return to the Octagon this weekend in Melbourne. Speaking to the media before UFC 243, the current champions says,” The last couple of years have been a bit up and down, but I feel absolutely amazing. I do believe in ring rust if you’re not doing certain things to prepare yourself for competition. If you’re not competing at all, if you haven’t competed at all and you’re not used to the adrenaline dump, not used to the pressure that comes with competing, then certainly the pressure is going to get to you and you might falter but on the back of that emergency surgery that I had to undergo, I just doubled down on my health. I’ve just become stronger, better for it.”

The surging middleweight contender takes on the division’s ruler in the main event of UFC 243. Israel Adesanya comes into this fight with a perfect 17-0 record, five of those wins coming in the UFC, including a third round decision win over his idol, Anderson Silva earlier this year in February at UFC 234 and a brutal first-round finish of Derek Brunson last November. The Australian is a former kick boxer with excellent technique and has got a dynamic range of weapons on his feet which makes him explosive and unpredictable. The Nigerian born New Zealander is a must-watch fighter these days and is arguably the best in the sport when it comes to using his legs and knees. The only concern for Adesanya is that he has shown little to no ground game, as he’s all stand up striking. Adesanya’s last fight, with the Gastelum, is still worthy a reel highlight where the charismatic and crafty striker rallied down the stretch to pull away from “The Knuckles” and claimed the interim middleweight title. Speaking to media, The Last Stylebender says, “Robert’s a guy I can pick apart easily. A challenge I haven’t faced before? I don’t think so. He just does what he does very well. There’s only a certain amount of awkwardness that he has that I haven’t seen before, but he can try to prove me wrong. From what I see, though, I’ll pick him apart quite easily. I’m just going to do what I always do in there. Once I get flowing it doesn’t matter what he brings or what he presents to me.

With strength and expertise running parallel, UFC 243 is a compelling, competitive, and an exhilarating matchup which really has a very real Fight of the Year potential.

The co-main event this week is a reminder of the abode of talent that exists in the lightweight division along with a tremendous opening act for the middleweight headliners.

Al Iaquinta made his Octagon debut after an impressive run on The Ultimate Fighter and since then has ruthlessly vanquished many of his divisions toughest. In the aftermath of a stellar performance against Khabib a year back, the American has been a main event staple over his last two bouts, sharing the cage with Kevin Lee and Donald “Cowboy” Cerrone in five-round affairs. “The Raging” Long Island native is unbeatable with his perfect blend of pace and his wrestling, keeping opponents guessing and giving them no breather. Coming off a loss in May, Iaquinta needs to get back into the win column in order to maintain his place in the rankings and avoid a four-fight run with only a single victory. With a significant rate of 4.28 strikes per minute and an accuracy of 40 %, “The Raging” Iaquinta is no stranger to attempting takedowns and churning out victories through ferocious knockouts. Speaking to the media, Iaquinta says, “I think Dan’s a very tough opponent. He’s the kind of guy that you got to put out. He doesn’t go out easily. So the goal is to put him out early. The goal is to finish the fight quick and easy. And I think that’s definitely a possibility. I have a lot of things that I’ve been working on that I think I could land early in the fight, but if not, I know he’s tough and I know it’ll be a 15 minute beat down”

Dan “The Hangman” Hooker has a 5-1 scorecard since his return to the lightweight division and is entering the Octagon at UFC 243 on a back of a first-round knockout win over James Vick in July. The City Kickboxing representative pursues his finish every time and has myriad ways of ending fights, leaving the opponent extremely clueless about his next move. His opportunistic submissions and powerful punches are surely going to give “The Raging” a very tough time at the octagon. Addressing the media , the New Zeaand born mixed martial artist says, “I’m not looking to get in arguments; I’m just looking to fight. I always feel like I just have to be straightforward with it and I don’t have to build a persona or a character because my fights are very entertaining and people want to see me fight; they know what my fights entail and they’re excited to watch my matches. I don’t need to do the Colby Covington, ‘make up some fake persona, talk a bunch of trash’ because my fights aren’t boring as hell.