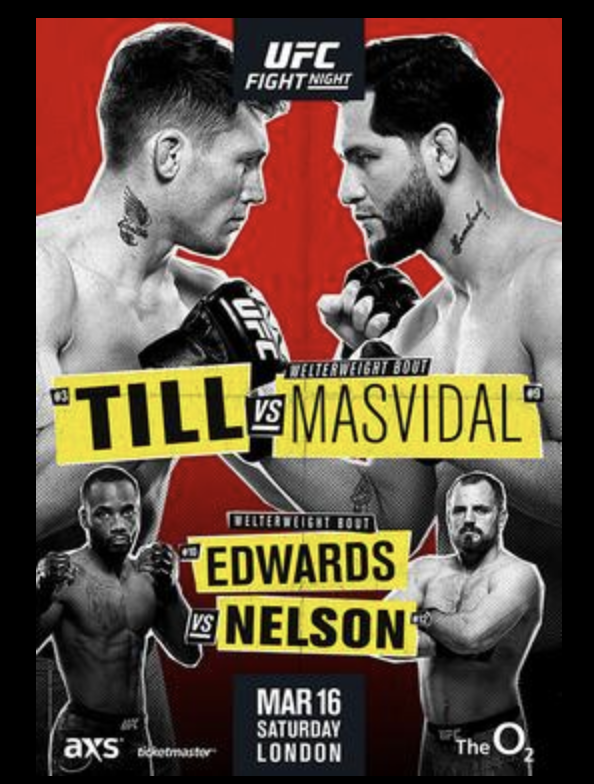 London has been the home for UFC events for more than a decade and has witnessed some of the most memorable moments in UFC history, including Micheal Bisping’s win over legendary Anderson Silva in 2016. UFC returns to the O2 Arena in London this weekend for highly anticipated UFC Fight Night 147. This event is headlined by Darren Till and Jorge Masvidal for the Welterweight main event. The co-main event features another Welterweight bout between local hope Leon Edwards and the pride of Iceland, Gunnar Nelson.

With a new welterweight champion at the top of the division, Darren Till and Jorge Masvidal know how important this main event fight could be for their future aspirations to one day possibly battle Kamaru Usman for the title.

Darren Till is coming back after the first loss of his professional career against Tyron Woodley at UFC 228 and will be determined to get back to his winning ways. Prior to the setback, Till was on a blistering run, showcasing his world-class boxing skills and massive knockout power while beating opponents such as Donald “Cowboy” Cerrone and Stephen “Wonderboy” Thompson. Possessing elite power for the Welterweight division, 10 of Till’s career wins have been by KO and having spent significant time in Brazil, his Jiu Jitsu is also as strong as his striking.

With two losses in a row behind him. Jorge Masvidal hasn’t stepped foot in the Octagon since November 2017 which means he will be hungrier than ever to emerge victorious in London. At his best, Masvidal is a gritty competitor with knockout power in his hands and a ground game that could put any fighter in trouble if they hit the floor. While Till dominates with his high impact power, Masvidal makes up for it with smart grappling moves which he uses to make his opponents submit.

Both Till and Masvidal are known for putting it all on the line whenever they step into the Octagon, so this should be an adrenaline-fueled main event this weekend.

Leon Edwards will be fighting in his home country for just the fourth time under the UFC banner. The Englishman is riding on a six-fight winning streak with notable wins over the likes of Vicente Luque and Bryan Barberena. Leon Edwards is confidently climbing into title contention in the welterweight division but if he wants to get to his seventh straight victory he has to go through Gunnar Nelson, who is a submission specialist looking to make his own name within the highly competitive Welterweight division. Listening to his interviews, Edwards has a resolute self-belief and it will be interesting to see how far he can go in one of the UFC’s most stacked divisions.

Gunnar Nelson had dealt with injuries that had kept him side-lined for over a year, but his return last December came with a statement performance as he finished Alex Oliveira in the second round at UFC 231. Nelson has one of the best ground games in the entire UFC and if he’s able to secure a dominant position on the mat, there is a high chance he’ll finish Leon Edwards. He will need to show his submissive expertise again in this fight because his counterpart is a strong striker with dynamic strength in his feet.