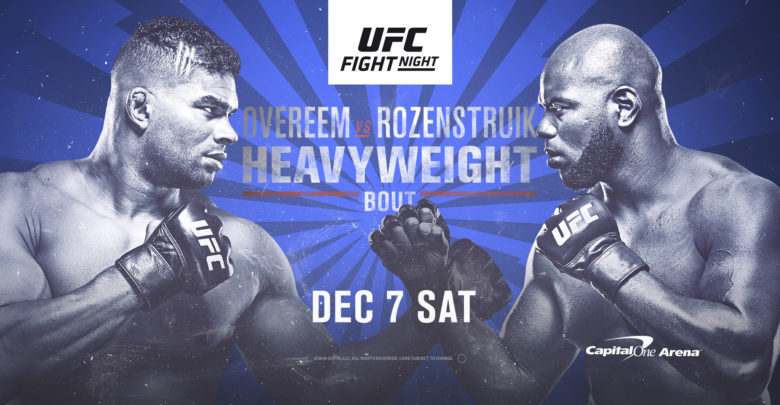 Fight fans are in for a treat this Sunday as the UFC invades Capital One Arena, Washington for an electrifying main event which showcases Alistair Overeem versus Jairzinho Rozenstruik in the Heavyweight Bout category. Adding to the excitement, the co-main event will feature the strongest female wrestlers in UFC as Marina Rodriguez and Cynthia Calvillo are all set to punch and grapple to rise in the Women Strawweight category.

This week, UFC has made inroads all the way to Washington where Alistair “The Demolition man” Overeem will be facing off Jairzinho “Bigi Boy” Rozenstruik. The main event this time was initially supposed to see Walt Harris take on Alistair Overeem, but due to Harris’s unavailability, the card had to look out for a replacement and Jairzinho Rozenstruik stepped in to face the veteran, giving all the UFC fans an intriguing Heavyweight clash this weekend.

The former SLAMM Soema Na Basi World Champion, Jairzinho Rozenstruik, currently holds an unbeatable UFC record of 9 wins and 0 losses. At 246lbs, ‘Bigi Boy’ is surprisingly quick and agile but most notably, hits incredibly hard. Meanwhile, Alistair “The Demolition man” Overeem may be closing in on 40, but he’s clearly still a force to reckon with due to his experience in the Octagon. After suffering back-to-back losses to Francis Ngannou and Curtis Blaydes, the Dutch superstar rebounded with consecutive first-round finishes over Sergei Pavlovich and Aleksei Oleinik to re-affirm his standing as one of the top talents in the division. However he has been wobbling from strikes in his recent fights but that solid legwork on the ground along with a record of 74% grappling accuracy will surely prove an advantage to the Demolition Man.

It would be interesting to see whether the “proven veteran” proves himself again or will the “rising star” continue his unbeaten form in UFC.

A venomous boxer with power-packed punches, Cynthia Calvillo, is equally dangerous on the ground as she is with her hands. UFC still remembers her wins against Poliana Botelho and Cortney Casey to solidify her place in the Top 10. Apart from her only loss against former champ Carla Esparza, Cynthia Calvillo, always fights her strengths and calculates her moves depending on her opponent and is desperately looking to take the next step forward in her title chase. Her opponent, Marina Rodriguez, the fighter with a long reach, is yet another unbeaten fighter who has always maintained the standard of her performances by never leaving her fans or critics disappointed with her time in the octagon. The fans still remember her last fight with Tecia Torres where the Brazilian used her range to avoid Torres’ boxing combinations and strategically work her over with kicks to come out victorious in the Octagon.

This one is a tricky one to pick as both women are highly skilled in all areas along with an abode of knowledge of their competitor’s strength. The fans can expect nothing less than fireworks as the best fight their way to glory inside the Octagon this weekend.

Previous articleFormer Bantamweight king Renan Barao released by the UFC
Next articleHere is why Conor McGregor feels Jose Aldo is cutting down to Bantamweight!