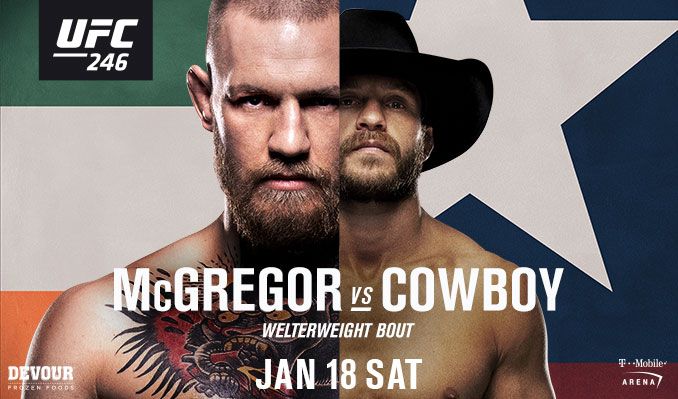 The UFC has arranged for a grand opening of the new decade. In the very first event of the year, Conor McGregor will return to action against Donald Cerrone. The UFC is planning to cash in at every opportunity to market the biggest star of the sport.

On New Year’s Eve, the UFC released a new promo for the welterweight clash scheduled on Jan. 18. The fight features fan favoruite from the sides. While McGregor is an icon in himself, ‘Cowboy’ is one of the fighters with arguably the least amount of haters.

Have a look at the promo below,

McGregor will return to the Octagon after his last fight against Khabib Nurmagomedov ended not in the way he wanted it to. The Irishman tapped out to the current lightweight champ. After that fight in Nov. 2018, Conor has been away from the sport for a while. A fight with ‘Cowboy’ was brought up many times last year. However, the fight never happened owing to the fact that McGregor wasn’t willing to fight on a card that was not headlined by him.

Meanwhile, Cerrone has fought for a total of four times the previous year itself. He won as many as he lost out of the four. Cerrone holds the record for most UFC wins as well as most UFC finishes. He is also the record holder for most post fight bonuses in the UFC.

How Cerrone manages to handle the wrath of Conor in the initial rounds will play a big role in deciding how the fight will plan out. ‘Mystic Mac’ has always been known for his devastating left hand. Cowboy, on the other hand, is a seasoned striker himself. With the amount of experience that he has under his belt, one can expect him to have a plan that takes his tally of wins to an even greater height.