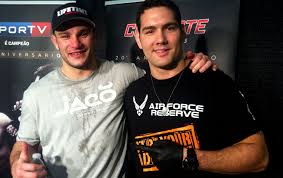 UFC will make it’s visit to the ancient European city of Czech Republic as Prague pays host to UFC on ESPN+ 3 this weekend. The main event will feature an interesting  for gmatch up of powerful light heavyweights as New Yorker Gian Villante will take on young upcoming Michal Oleksiejczuk.

The language barrier however was giving the UFC officials some problems, hence the UFC had translators for every fighter on the card. The ever so funny Villante decided to have a translator for an interview in English as well. A familiar face volunteered for him as former middleweight champion and Villante’s teammate Chris Weidman stepped up to translate for fun. (via Twitter):

After seeing how many fighters at #UFCPrague Media Day had their own translators, I asked @chrisweidman if he could stand in for my interview with @GPVillante. He crushed it (for @MMAjunkie – 📹 by @kammakaze) pic.twitter.com/MCnpjUZCuL

Weidman and Villante are training partners at Serra-Longo Fight Team which also serves as a training ground for many notable fighters like Aljamain Sterling and Al Iaquinta. Villante (17-10 MMA, 7-7 UFC) has been alternating wins and losses lately. Villante in his last fight, was able to edge veteran Ed Herman for a split decision.

Michal Oleksiejczuk on the other hand, last fought at UFC 217 in December 2017 against a very tough Khalil Rountree Jr. Oleksiejczuk won the fight via unanimous decision, however his victory was overturned due to being tested positive for a banned substance.