Welcome Back, Alex The Mauler! 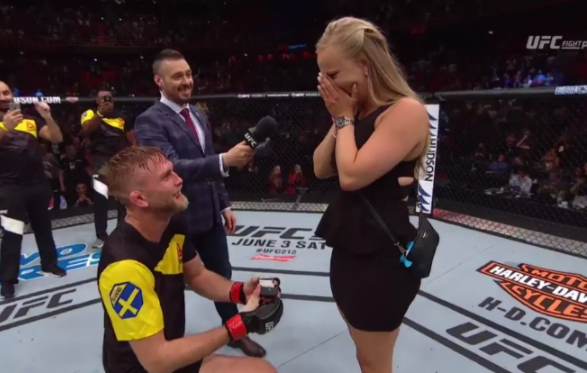 It was a beautiful moment last night, when Alexander Gustafsson proposed to his (now) fiancée and she – amid many hugs and kisses – said yes. This visceral scene came right after “Alex The Mauler” took Glover Teixeira’s soul in a performance that is his most impressive to date. It was like a scene from a movie: the good guy beats his adversary to a pulp and then gets the girl with all his loved ones watching. Except this wasn’t a movie; it was real life and Gustafsson did it in front of not just his loved ones, but over 12,500 screaming hometown fans in Stockholm, Sweden. And all this came after he cemented his place as the best Light Heavyweight in the world, north of Jon Jones and Daniel Cormier.

Gustafsson came into this fight a winner of just two of his past five fights and his last win was a not-so-impressive decision over Jan Blachowicz. His striking didn’t look like his striking of old and he had to resort to his wrestling – which is outstanding by the way – to get the decision in that fight. While Gus was ranked number 1 in the official UFC Light Heavyweight rankings, that was mostly because Jon Jones is out of the picture. He was as far away from a title-shot as his opponent. He’s not, anymore. His performance last night guarantees him a title-shot, especially if Jones wins the title at UFC 214. Jones – Gustafsson 2 is a fight that the talent deprived Light Heavyweight division desperately needs.

‘The Mauler’ looked to have a chip on his shoulder last night when he entered the Octagon; he needed a show-stopping performance to resurrect a career that was appearing to go downhill. Gustafsson talked about a renewed focus on his training before the fight and he looked sharper than ever. He started the fight feeling out Teixeira and avoiding his power strikes. As soon as he had the distance figured out, he started to hit Teixeira and got out of the way before Teixeira could counter. ‘Getting out’ sometimes meant literally running away from the hard-hitting foe, but that’s just vintage Gus! The same story followed in the second round and he even hit Glover with an incredible spinning elbow – the same elbow that spelled his doom against Jon Jones. Alexander dropped Teixeira in the third round with a vicious combination and delivered some devastating ground and pound. It was a testament to the Brazilian’s toughness that not only did he withstand a vicious beating, but answered the bell for each round and continued to pressure ‘The Mauler’ relentlessly, making him work the entire fight. The fourth round was the same story with Gustafsson tagging Teixeira and Teixeira putting pressure on the Swede. Gustafsson finally ended the one-sided beating in the fifth round, when he knocked out the Brazilian with a vicious right hand preceded by an equally vicious uppercut.

A big story coming out of the fight was Gustafsson’s uppercuts from hell. He landed many uppercuts throughout the fight and hid them so beautifully that Glover never saw them coming. In fact, he hid them so well that even Germaine de Randamie can take notes (okay that was cheap shot. I kid, I kid). Overall, his boxing looked excellent and it looks like ‘The Mauler’ is back. His wrestling is always excellent and while he was taken down once with an awesome takedown, he got right back up. Good luck keeping that guy down!

Gustafsson did not use the post-fight interview to call out Jones or Cormier. Rather, he proposed to the mother of his child in what will surely be among the best moments in MMA for years to come. The mild-mannered Swede did not, however, mince words at the post-fight presser:

“I don’t like him [Jon Jones],” Gustafsson said at the post-fight press conference. “I give him that he’s the best fighter of all-time, the best pound-for-pound fighter of our division — of course, everybody knows that. He hasn’t even lost a fight yet, he demolishes everyone he fights. But as a person, as a champion, he’s not a champion, in my eyes. He’s not a good person, in my eyes.

“That’s why I always tell the guys, ‘I hope that DC [Daniel Cormier] wins, because I like the guy, he’s a worthy champion. So that’s what I mean when I say that he’s the biggest enemy of all-time.”

Regardless of what he says, Jones winning the title at UFC 214 is the best case scenario for Alexander Gustafsson. The fight might happen even if Jones doesn’t win. The timing is perfect for a Jones-Gustafsson rematch. We can all finally be at peace when that happens and we find out who is better of the two. Until then, let’s marvel in the return of Alexander ‘The Mauler’ Gustafsson.