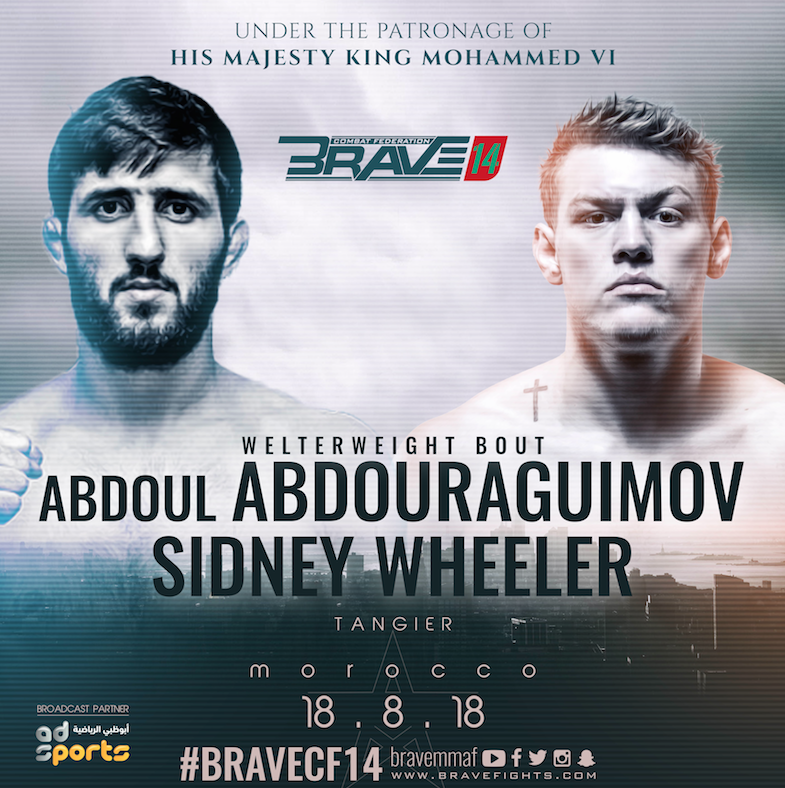 Welterweights Sidney Wheeler and Abdoul Abdouraguimov will collide at Brave 14, set for The Omnisports Indoor Club, in Tangier, Morocco, on August 18th. Ever since the bout was announced, fans and specialists thought it could end up being a clash of styles. A Sambo world champion, Abdouraguimov would have the advantage on the floor whereas Wheeler could very well prevail should the bout remain standing.
Other Brave Welterweight fighters have followed that trend, with Tahar Hadbi saying that “if Abdouraguimov is able to put his opponent to the ground, the fight is over”. Poland’s Pawel Kielek, meanwhile, predicted that Wheeler, as the more experienced athlete, would be able to keep the fight standing and win by KO.
Brave president Mohammed Shahid, however, is not buying into the “style x style” tag for Wheeler x Abdouraguimov.
“I know that people are saying that Abdouraguimov has an advantage on the floor and Sidney could very well knock him out should the fight stay standing. But people forget Wheeler is one of the best wrestlers out there right now. He knows how to defend takedowns and knows how to get back up when he gets taken down. He’s been doing this his whole life! Either way, I feel like this is going to be a very good and technical fight, standing or on the ground. And Abdoul is not just a grappling-based fighter, he’s technical everywhere, but he is fearsome on the ground”, says Shahid.
Brave 14 will be headlined by a Welterweight bout between Moroccan star Ottman Azaitar and Serbia’s Danijel Kokora. Also set for fight night are Bantamweight stars Arnold Quero and Felipe Efrain facing each other, and a collision of rising contenders at Featherweight, between Jeremy Kennedy and Danyel Pilò.