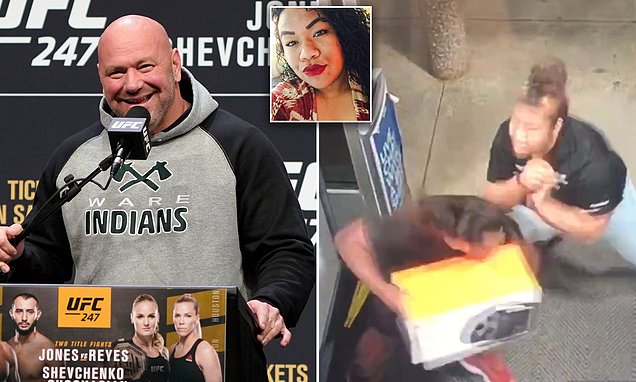 A Best Buy employee fired for beating up an alleged shoplifter may have a new job — with the Ultimate Fighting Championship. 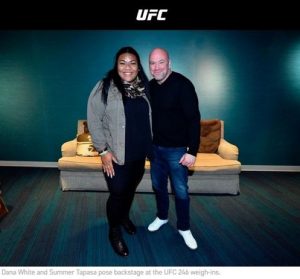 UFC boss Dana White was so impressed by the footage of 24-year-old Summer Tapasa mauling the alleged would-be crook that he invited her to watch Conor McGregor vs Cowboy Cerrone. Later, Tapasa did make an appearance at the UFC 246 weigh-in Wednesday, standing between main event fighters Conor McGregor and Donald “Cowboy” Cerrone as they squared off.

Tapasa became a mini-sensation in the month of January after footage of her taking out an alleged shoplifter at a Hawaii Best Buy went viral. The Best Buy security staffer busted a shoplifter in Hawaii on Dec. 23 after the 24-year-old  spotted the thief trying to lift some pricey product. When he tried to push his way past her she bounced him backwards. The clip quickly went viral.

Instead, not only did the Women’s Football League Association come calling after seeing Tapasa’s seamless tackle but another sports biggie has stepped into the ring. UFC president Dana White tweeted the clip and celebrated it.

She was also offered a job by White. After going back home to Hawaii to mull over her options — which also included an offer from an all-female Football team — Tapasa ultimately took White up on his offer, and she is now a corporate security officer for the promotion.

“Do you remember the girl Summer that worked for Best Buy as security in Hawaii? Somebody was stealing a TV and she beat his ass and she stopped him from stealing the TV. She got fired by best Buy which I thought was horrible,” said White via a video posted on Twitter.

Welcome to the @ufc Summer Tapasa!! I’m so happy you chose a career with us 👊🏻👊🏻 pic.twitter.com/GCmcCJF6sL

“I brought her out to Vegas. I offered her a job here. She went back to Hawaii, she weighed all her options and she decided to work for UFC. She is now a UFC employee, so for all of you thinking about fucking around here at UFC you will get your ass whooped by Summer,” he added before the video shifted to Tapasa herself.

“My name is Summer Tapasa and I am a UFC corporate security officer. I have been working with UFC for eight days and I am looking forward to expanding my career and hopefully moving on up.”

Daniel Cormier predicts how Miocic vs Jones will play out

Previous articleMariusz Pudzianowski: An Underrated MMA Talent
Next articleUFC News: Claudia Gadelha out of her UFC 253 fight against Yan Xiaonan