Andy Ruiz Jr shocked the world last week when he knocked out the British superstar and IBF, WBA, WBO heavyweight champion of the world in the seventh round to become the new king of the division at the Madison Square Garden in New York City.

What unfolded on 1st June at the MSG, wasn’t supposed to happen and not in anyone’s wildest dreams did anyone think that a small 6’2 and 268-pound Mexican-American boxer would knock out a 6’6 and 245-pound British superstar who is built like a Greek God. Andy Ruiz Jr. was a replacement fighter, as Joshua was supposed to fight top-rated heavyweight contender Jarrell Miller, who failed three-drug tests and was ultimately banned for six months. 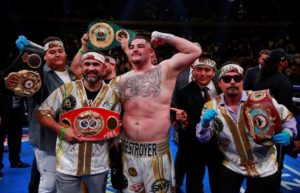 If it wasn’t for Andy getting inside Joshua’s promoter Eddie Hearn’s Instagram DM asking to be the replacement fighter, he probably wouldn’t even be in this position. But the impossible has happened, the 20/1 underdog has knocked out the British star to become the champ.

Ruiz’s popularity has also risen tremendously after the fight. Before the fight with Joshua was announced, he just had 66,233 followers on Instagram, but right now he boasts of a staggering 737,000 followers — an increase of over 11 time. From WWE superstar Triple H to Hollywood star Sylvester Stallone, everyone took to social media to congratulate the newly crowned heavyweight champion.

For this fight, Ruiz Jr banked a staggering $7 Million, compared to $25 Million of Joshua, which is pretty obvious as he was the A-side going into the fight. However, in the rematch, Ruiz might make even more money than he made in the first fight.

Despite his achievements this past week, the journey to the top wasn’t easy for Andy Ruiz Jr. He grew up in Imperial Valley in California near the US-Mexico border. It was a small farming town, it was here where Ruiz Jr took up boxing at the age of 6 and started doing drills with his father. Even though he was born in the US, he represented Mexico at the Jr Olympic games and won two gold medals.

Andy Ruiz Jr. later also worked for his father in construction for a time before deciding to be a full-time boxer and starting his amateur career in Mexico. His grandfather owned a boxing gym in Mexicali that was used by featherweight champion Jorge Páez.

He later made his pro debut at the age of 19 against Miguel Ramirez in Tijuana, Mexico and since has never looked back. Over the years he has amassed a record of 33-1-0 with 22 KOs. His sole loss came against Joseph Parker of New Zealand who Anthony Joshua had already beaten last year.

Ruiz said how much this victory means to him and the Mexican people and how significant it was. He said it bothered him about how most people talk about Mexicans. Before the fight, he said each Mexican had his own dreams.

“It means a lot, especially knowing I’ve worked from 6 years old to get to where I’m at now,” Ruiz said. “But it won’t mean something only to me.

“The hard-working Mexican tries to get up here looking for opportunities because America’s one of the greatest countries in the world. For me, I’m an American and I’m a Mexican. I live here. And it hurts me the way a lot of people talk about Mexicans when I know we’re all about hard work and dedication.

“Each Mexican has his own dream, and I’ve come to believe as long as we focus, you can accomplish anything you want. So maybe by winning I can change some minds.” Ruiz said in an interview to LA Times.

After winning the title, he acknowledged how much this victory meant for him. During the post-fight press conference, he thanked everyone in his camp. He then got emotional while talking to his mother and said that their struggles are going to end soon.

Andy Ruiz Jr. to his mom after becoming the heavyweight champ:

“Our lives are gonna change. We don’t have to struggle no more” ✊

“Mom, I love you, Our lives are gonna change. We don’t have to struggle no more,” an emotional Ruiz said. “Thanks to god, everything happened for a reason.”

Andy Ruiz Jr said he will rematch Anthony Joshua soon and he wants the fight to take place in Mexico. Although it’s highly unlikely as according to Eddie Hearn, they are targetting the rematch to take place in November/December in Cardiff.

Previous article
Recapping all the important points from Ariel Helwani’s interview of Nate Diaz
Next article
Urijah Faber is eyeing a fight against T.J. Dillashaw after his UFC comeback