Who is Wilson Reis? 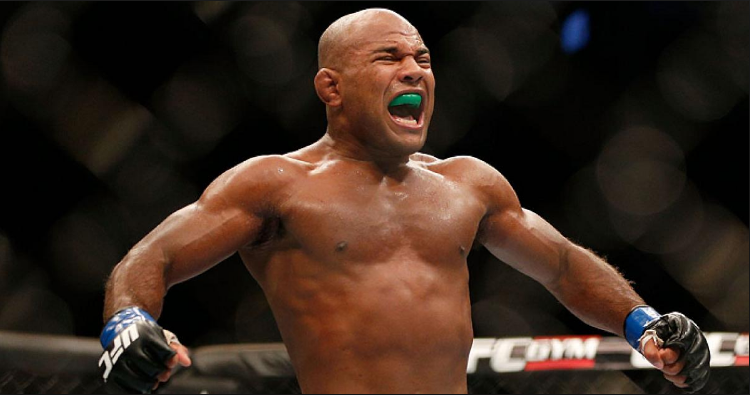 “Who the f*** is that guy?”. That’s one of Conor McGregor’s many, many famous one-liners. And while this did not ring true for the originally intended person, there is one who just might fit the bill. Wilson Reis is going to fight the best pound for pound fighter on the planet this Saturday for the Flyweight championship of the world, yet nobody seems to know this man. People will take notice, if he beats ‘Mighty Mouse’, but that’s easier said than done.

Wilson Reis was born in Januária, Minas Gerais, Brazil and moved to São Paulo when he was five years old. He described his early childhood as hard. Like many other Brazilian Martial Artists, Reis discovered and fell in love with Jiu-Jitsu. His hard work paid off when he won the Jiu-Jitsu World Championships in 2004 as a Brown Belt. He was soon awarded his Black Belt and then he turned his attention towards professional fighting, towards MMA.

Wilson Reis made his pro MMA debut in July of 2007 with a unanimous decision victory. He went on to win his next six fights, including wins over future UFC fighters Zach Makovsky and Bryan Caraway. This win streak included the EliteXC World Bantamweight Championship victory, a title he never defended. It was during this time that he signed an exclusive contract with Bellator, a promotion that was in it’s infancy. He subsequently had his first loss to future UFC Bantamweight title challenger Joe Soto in Bellator. He would fight nine times in Bellator over the next two and a half years, losing four and winning five.

Sometime after winning the EliteXC Bantamweight title, Reis joined the Alliance MMA gym, based in San Diego, California and home to the greatest Bantamweight that has ever lived – Dominick Cruz. It was at Alliance that Reis found a family and the best training partners in the world.

“I have been training with Wilson since 2009,” Cruz said. “He legitimately has been the perfect training partner my whole entire career. He’s been there for every single fight I’ve had since I won my first title.”

Wilson Reis was pretty one-dimensional when he started out in MMA, as is the case with most fighter who excel at one particular aspect of MMA. For Reis, it was his world championship Jiu-Jitsu, which helped him get three submission victories in his first four professional fights. Not that Reis wasn’t talented, and Alliance lead coach Eric Del Fierro certainly recognized that talent:

“Wilson has been with me about ten years now,” said Del Fierro. “When he came out to us, he was already a champ in an organization called EliteXC, I believe and he had a lot of talent. Coming to us and, you know he was looking to change his striking game and just get a little bit more proficient in it. When he came with us, he was mostly a Jiu-Jitsu player. Now he’s developed his wrestling game, he’s developed his striking game. He brings all the weapons.”

He certainly does now.

After compiling a record of 16 and 4 in secondary promotions, Reis finally made his UFC debut in September of 2013 and won a unanimous decision against Ivan Menjivar. He would then lose a closely contested split decision to Iuri Alcântara. Following this loss, Reis decided to move down to the Flyweight division. Just when it looked like Reis was on a roll, with back to back wins including a first-round submission of Scott Jorgensen, he again lost a decision to Jussier Formega. After beating Dustin Ortiz in his next fight, Reis was expected to face the champion Demetrious Johnson at UFC 201. As luck would have it, Johnson got injured and Reis had to take a replacement fight.

“I was sad. I was upset. I was training for a huge fight and opportunity. I had that on my mind for two months, building expectations, improving myself. And the fight wasn’t even postponed; it was canceled. It was certainly very frustrating.”

Reis took out all his frustration on his opponent Hector Sandoval with a first-round rear-naked choke. With his eyes on a title shot against the sport’s best, he won his next fight against Ulka Sasaki. When the call finally came, Reis probably wasn’t surprised. And this time, he’s more prepared than ever:

“I believe everything happens for a reason,” Reis said. “The fight didn’t happen last year, it was canceled three weeks before, when I was super well-prepared, but I used this extra time really well. I fought twice, did two more training camps, and evolved a lot. I was ready then, and I believe I’m even better this time.”

Reis also believes that his size will be an advantage to him.

“I feel that my body is stronger, physically and wiser now than was ten years ago,” Reis said. “So every time I step in the octagon, I am just ready – bulletproof mindset and then body to the fight.”

“So far every fight I had so far at 125, like you know probably like seven fights, I feel that I was the stronger guy, physically. Being the stronger fighter – now what that brings to me? That brings good confidence, you know, cause I know he gonna have to deal with that and deal with my power, you know, deal with my weight. You know you have to carry me around and everything. He would definitely be spending extra energy doing that. That’s a very good thing on my side. I don’t have to worry about getting tired and my cardio is gonna be real good for a five-round fight. (sic.)”

Not only is Reis well-prepared for the fight, he is dangerously confident too:

“In my mind, it ends with a submission,” he continued. “That’s how I see it. A fight with a dominant submission. I’m ready for a war, but I don’t think it will be a war. I’ll put him in situations he never experienced before, and I will get this victory.”

“After I defeat him, he deserves a rematch more than anyone for the multiple times he defended the belt.”

One would say don’t count your chickens before they hatch, but this is MMA. Confidence is always the key and the biggest battle is mental.

“I’ve envisioned this a thousand times,” Reis said. “I imagine this for two or three years already. Lights down, I walk to the Octagon. It’s always a beautiful moment, and I’m always confident in the victory.”

No matter how many times Reis has envisioned this, beating ‘Mighty Mouse’ is no cakewalk. But Reis’ training partner and Bantamweight GOAT believes in him:

“Wilson reminded me of me so much it’s ridiculous. In the sense of he’s kind of just been through this thing. He’s been run through the gauntlet. Nobody knows about him, but he’s faced every tough individual near my weight class and his weight class for the past ten years. He’s so seasoned, he’s got so much experience because of all those fights since 2007. And not just that, but he’s stayed busy and he’s never been injured. So, he’s never had to just stop for a long period of time. He’s always consistently training, always consistently in shape and always consistently learning. He’s got the kicks, he’s got everything and the fact that he’s a southpaw gives problems to people. “

“My prediction for this fight is Wilson with his hand raised because of some big takedowns and mixed in with the strikes that he lands. “

There are many ways this fight can go. Reis may even lose this fight as many believe he will. One thing is for certain though: people will know who the f*** this man is, now.