One of the most interesting matches happening at WrestleMania 34 will be for the RAW Tag Team Championships between The Bar and Braun Strowman and a mystery partner. Braun Strowman took to his Instagram to tease us about a possible reunion.

Braun Strowmna took to his Instagram to post a picture of him and Bray Wyatt hanging out together: 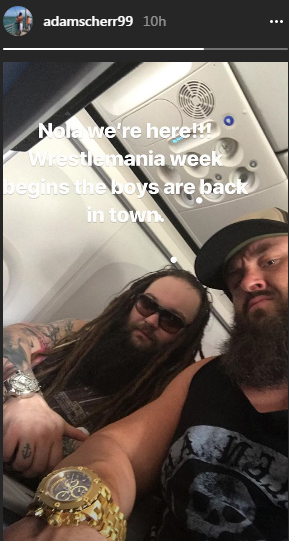 With such a caption, it is obvious that Strowman is trying to tease his fans about a possible reunion of the duo. However, this comes after Wrestling Observer Newsletter reported that Bray Wyatt could possibly end up being Strowman’s partner at WrestleMania.

This is interesting because, at the Ultimate Deletion, Bray Wyatt was thrown into the Lake of Reincarnation by Matt Hardy and hasn’t been seen since. For those unaware, whoever gets thrown into this ridiculous lake, comes out as a new character or an older version of themselves.

If Wyatt were to make his return at WrestleMania as a new character, then it would explain why he has been absent from WWE TV. It is interesting to note that Wyatt has been appearing on RAW Live Events and has been teasing a change in his character during his segments with Woken Matt Hardy.

Woken Matt Hardy has also stated on multiple occasions that Bray Wyatt’s evil persona, Sister Abigail, has been rendered “OBSOLETE”. This basically means that Bray Wyatt can now appear as a new version of himself, free from all the spooky shenanigans.

Fans of Wyatt have been wanting a change in his character for quite some time because his regular antics are not as popular as before. It would be quite amusing if Bray Wyatt debuts a new character and wins the RAW Tag Team Title upon his return.