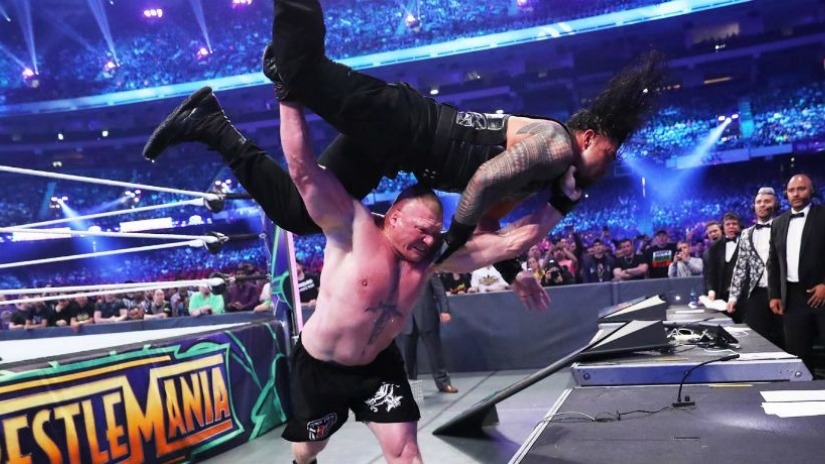 WWE has announced that Brock Lesnar has been re-signed and already booked his rematch with Reigns. No doubt in an attempt to build up the upcoming Greatest Royal Rumble event, Lesnar and Reigns will compete for the championship in a cage match during the WWE Network special on April 27.

The length and specifics of Lesnar’s new deal were not released by WWE as part of its announcement. WWE’s official announcement doesn’t indicate how long Lesnar has actually re-signed with the company for. It’s possible his Wrestlemania win was merely meant to extend his stay until Great Royal Rumble when Reigns will win and Lesnar will leave, as many expected at Wrestlemania. Despite the loss, Reigns was booked to look tough, taking numerous F5s and bleeding profusely before finally being pinned. 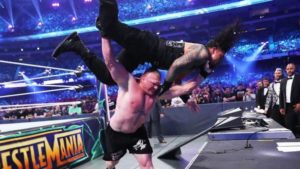 Lesnar, who has held the title for a full year after beating Goldberg for it at WrestleMania 33, will defend the championship against Reigns once again — this time inside a steel cage in the main event of the Greatest Royal Rumble, a special event set to be held at the King Abdullah Sports City Stadium in Jeddah, Saudi Arabia, on Friday, April 27 at noon ET.

Lesnar will be allowed to fight in the UFC under his new WWE deal, according to sporting news, because he is still under contract with the MMA promotion. White said last week at the UFC’s 25th-anniversary press conference that Lesnar still “has fights left on his deal.”

Lesnar will not be able to jump back into the octagon right away, however. After his fight with Hunt, he was hit with a one-year suspension by the United States Anti-Doping Agency after testing positive for anti-estrogen drugs on two different occasions. Lesnar’s victory became a no-contest, and he retired from the sport.

If he decides to return to the UFC, Lesnar would need to unretire and re-enter the USADA’s testing pool to serve out the final six months or so of his suspension, according to reports.

If Lesnar does return to the octagon, he could get an immediate shot at the heavyweight championship, White said. It’s possible Lesnar could face the winner of the July fight between champion Stipe Miocic and Daniel Cormier.

“He’s still under contract with the UFC, but we have not signed him to a fight,” White said.

We don’t yet know where post-Wrestlemania storylines are headed, but those should become clearer with the latest episode of Raw.