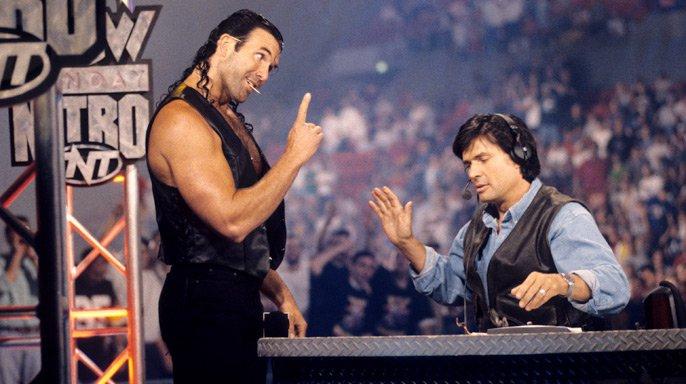 Former WCW president Eric Bischoff discussed how the nWo came to its creation on the first episode of his new podcast, 83 Weeks with Eric Bischoff. He also talked about how stars like Sting and Ric Flair were paid higher than top stars like Scott Hall and Kevin Nash. Quotes via WrestlingInc.

“It was never a thing with me. We had a budget in place that had been approved the year before by Turner Broadcasting Finance Committee, so I knew the parameters that I had to work with. I knew that politically, from a locker room prospective, I knew that there was no way that I can bring these new guys in and make more money than Ric Flair,” Bischoff said. “Nor did I wanted to put them at the level, even if Ric Flair hadn’t been there, I didn’t want to pay them at Sting’s rate. Sting was the highest paid guy. We were all comfortable with that, the rest of the talent was comfortable with that, but I never used it as a barometer publicly. I knew that within my budget, and Sting being the highest paid guy, along with Ric Flair and a few below him, again, the questions that I did have with Scott Hall and Kevin Nash, especially with Kevin because I talked with him more based on our previous relationship with him.”

But the deal worked well for Kevin Nash and Scott Hall though because the schedule was easier and they didn’t have to work as much as they had to when they were in WWE.

“Kevin made it clear to me, we put a maximum of 180 dates, WWE was at 250, we may be splitting hairs to a degree, but it wasn’t half the dates. It may have felt that way to Scott and Kevin, but we had a maximum of 180 dates, we never hit the maximum dates, it was around 125-130 dates a year, so it was definitely a lot less of a load than what they were used to,” Bischoff said. “Kevin was expecting his very first child at that time, and in WWE he would have been on the road, add the travel that they worked along with the front and back end of traveling back home and leaving again they were probably gone 300 days a year, so it was a much lighter load. Add the income from pay-per-views, house shows, and all the profit shares, they were probably making $500,000 or more, but they had to work hard to get it, but they both expressed to me, especially with Kevin, it was much of a lifestyle consideration as it was a financial one.”

You can listen to the podcast here.

WWE: Samoa Joe says his rivalry with AJ Styles will continue in WWE