WWE: Jim Ross on how Ronda Rousey’s pro wrestling debut the most impactful ever 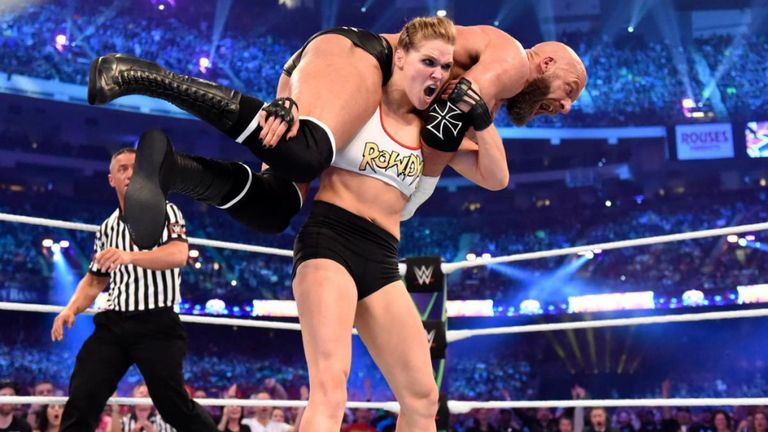 WWE Hall of Famer Jim Ross opened up about his thoughts on the pro wrestling debut of Ronda Rousey at WrestleMania during a recent interview with MMAJunkie.

Jim Ross explained the reason why he thinks Ronda Rousey’s debut was the most impactful he has ever seen in his 40 year career:

“I thought that Ronda’s debut was the most impactful pro wrestling debut that I have seen in my 40-plus year career. If you look at her skill set, experience-wise, from this genre in pro wrestling, it was almost non-existent,” said Ross. “But she had so much pressure on her. The hype was amazing. The expectations were mixed.
Some die-hard wrestling fans don’t even like her being there, which is absolutely insane. They are [sic] and goofy, no doubt about that. So, I was absolutely blown away by what she did and how she executed. She looked like an athlete; we knew she is an athlete. She’s a winner.”

According to JR, Rousey’s back-to-back two losses in UFC don’t matter as she has a more accolades and wins than losses:

“Now look, some say, well, she lost her last two fights. Kiss my a**,” said Ross. “How’s that? C’mon. She won a lot of fights, guys. You know what I mean? She’s a winner. She goes to the Olympics and medals. She’s a winner. So I knew that she was not going to drop the ball.”

Ross said that Rousey handled the pressure of performing in front of 70 thousand fans impressively despite the criticisms.

“It’s WrestleMania, guys. If you’re an MMA fan, then you say, ‘Well, what does it matter? It’s still pro wrestling.’ There was almost 80,000 people there,” Ross said. “She had so much pressure at this massive event, it would’ve been very easy for her to slip the bit and not have a great outing. If she continues to train as diligently and as ferociously as she has been, the sky’s the limit for her. She can be really, really good.”

You can check out the entire interview on MMAJunkie here.

Previous articleBellator MMA: Fedor Emelianenko reveals whether or not he considered retirement after loss to Matt Mitrione
Next articleWWE: Cause of death of Bruno Sammartino revealed