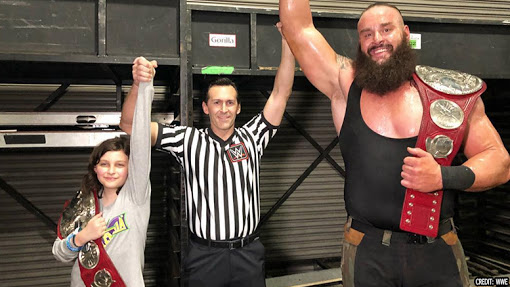 Wrestlemania is not your typical wrestling show. It is more like a carnival, a night of enjoyment and celebration. Therefore, classic matches are not preferred at the “Grand daddy of all shows”. Moments and surprises are given more value and WWE never ceases to impress us with their ability to bring out surprised and iconic moments out of nowhere

WrestleMania 34 was a wrestlemania with one of the lowest celebrity appearances. (I know Dana White and The singer girls appeared, but it’s still less than usual). But that doesn’t mean that we were deprived of moments and surprises. Bray Wyatt aligning with Matt Hardy, Asuka’s streak getting is broken, Bryan’s return, Ronda Rousey’s debut- we got it all.

Perhaps, the most surprising moment from WrestleMania was Nicholas winning the Raw Tag Titles along with Braun Strowman. Why is it so surprising? Nicholas is a ten year old child who won the tag team titles when he was selected from the audience by Braun Strowman. Incidentally, he was even tagged in the match but tagged Strowman in quickly

Nicholas got the loudest cheers of WrestleMania night, but sadly he and Strowman had to vacate his Raw Tag Team Championships because of some conflict in schedule.

Nicholas reads in fourth grade, and it is difficult for him to go to school and defend the title. So, he relinquished the title but warned that when his school is over, he will be back and somebody will “Get These Hands”!

The question arises, who exactly is Nicholas? The answer is- He is the son of senior WWE referee John Cone who was incidentally the referee of the match where his son won the Raw Tag Team Championship.

As much as proud John Cone have been while handing over the championship to his son, he made a mistake in referring, as Nicholas never made contact with his opponent before tagging out, which is illegal. But, a ten year old kid in a wrestling kid is way more confusing, so let it be.

Being the youngest champion in WWE and probably Pro Wrestling history, Nicholas will surely return to the ring after he gains some experience and age. His father was a wrestler, and he can easily admit his son into the WWE Performance Center- He’s a former champion off course. Until then, he should concentrate on his studies.