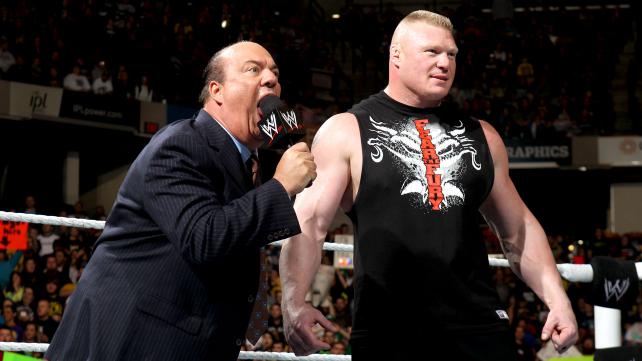 Brock Lesnar, among many other things, is also an extremely savvy businessman.

That was the side of him that many chose to perceive when he released a picture earlier this year, decked in UFC gear and standing alongside UFC president Dana White.

However, contrary to popular opinion that the picture just represented a marketing stunt, where he would pit the UFC against the WWE in hopes of securing a lucrative contract (as usual), his aide and on-screen advocate Paul Heyman feels that the Beast Incarnate is legitimately interested in fighting in the UFC again.

Speaking at length about a number of topics surrounding Lesnar, Heyman had this to say to Newsweek:

I don’t think it’s any secret that Brock is looking to get back into the octagon. He is obviously eyeballing another fight in UFC.

There’s no secret. He’s posing for pictures with Dana White wearing a UFC shirt in the UFC offices in Las Vegas.

That’s not a negotiating tactic, Brock Lesnar wants to compete inside of the octagon. There’s no leveraging that; it’s a fact.

Heyman also continued speaking about Lesnar’s upcoming WrestleMania 34 bout, and his thoughts on the Beast’s opponent at the event, Roman Reigns.

I think Brock Lesnar will bring out of Roman the audience’s respect for the toughness possessed by Roman Reigns.

In the fact that he’s going to have to endure a beating in public in front of 70,000 people the likes of which you are not seeing in the PG presentation of WWE.

What Roman Reigns will bring out of Brock Lesnar is the willingness to dish out such a beating in front of 70,000 people that will not be conformed to the PG standards of WWE.

Apart from this grim warning to Roman Reigns, Paul Heyman candidly opened up about his thoughts on Ronda Rousey’s transition to the WWE, the state of Kayfabe today and of course, a whole of more of Brock Lesnar.

Do you think Brock Lesnar fights in the UFC after WrestleMania 34? If so, who do you think the perfect opponent will be?

Previous articleMMA: Chael Sonnen: “I would have kicked Ronda Rousey’s ass right out of the [ESPN] set”
Next articleWWE: Paul Heyman says Brock Lesnar vs Roman Reigns should main event over AJ Styles vs Shinsuke Nakamura