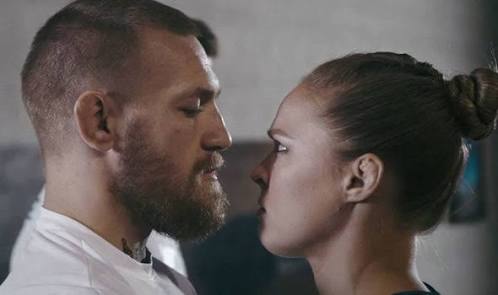 Ronda ‘Rowdy’ Rousey is undoubtedly a pioneer of women’s MMA.She was the former UFC Women’s Bantamweight champion of the world with six title defenses.However her streak was broken by the Jackson Wink product Holly ‘The Preacher’s daughter’ Holm at UFC 193 in November 2015.Rousey then made much anticipated return at UFC 207 in December 2016 against UFC Champion Amanda ‘The Lioness’ Nunes.Nunes came out blasting and handed Rousey her second consecutive loss by finishing her in just 48 seconds of the first round. Rousey has been inactive since and thus made her transition to Pro Wrestling in February 2018.

Rousey faced a lot of criticism from the MMA community for two back to back losses.However, that was not the case for all as not only fans but fighters showed support to Rousey.When Rousey was officially signing her contract at a WWE’s special event in ‘Elimination Chamber’ in February, on the very first row she saw some familiar faces.Loud cheers were made by current UFC Light heavyweight champion Daniel Cormier,his teammate and former UFC Heavyweight Champion Cain Velasquez and UFC Lightweight Michael Chiesa,which had Rousey in tears.Another fighter who showed support to Rousey was none other than UFC Lightweight champion ‘the Notorious’ Conor McGregor.

McGregor bestowed extremely kind words for Rousey. He said,”I’m delighted for her. Absolutely over the moon for her. She looked like she really enjoyed herself at the event. And I was very, very happy to see her. She’s a pioneer for the game.

When confronted by McGregor’s comments by Brett Okamoto of ESPN in an interview Rousey said,“I love Conor. He’s awesome. He’s always been great to me. He has my utmost respect as an athlete and as a man. I just appreciate him always being so respectful back to me,” Rousey said. “I just wish nothing but the best things for him. He took so much weight off of my shoulders, as well. I owe a lot to Conor.”

“Anything that he wants to do in life, I hope everything works out for him. If he doesn’t want to fight ever again,” she continued. “If he wants to hang out at home with his family, anything he wants to do… if he wants to be come a master blueberry grower, I hope he has the greatest blueberries to ever happen. I love Conor.”

Previous articleUFC: Conor McGregor happy to see Arnold Schwarzenegger recovering from a heart surgery
Next articleUFC: Khabib Nurmagomedov comes out in support for his friend