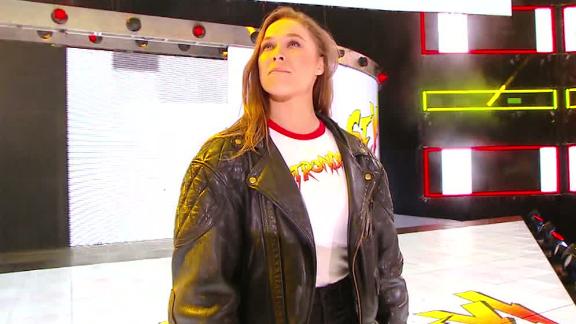 Former UFC Women’s Bantamweight Champion Ronda Rousey made her big appearance at WWE Elimination Chamber to sign her contract and get into a fight.

Making her second on-screen appearance for the WWE since joining the company this year,Rousey was advertised for a “contract signing” segment at the professional wrestling promotion’s Elimination Chamber show in Las Vegas on Sunday.

Ronda Rousey made her WWE debut late Sunday night to close the 2018 Royal Rumble, and it was announced just moments after the show went off the air that the former UFC bantamweight champion has indeed signed a full-time contract with WWE.

The segment featured WWE executives Triple H and Stephanie McMahon welcoming the former UFC women’s bantamweight champion to the WWE Universe with a contract for her to perform on Monday Night RAW and to have a match at WrestleMania 34 on April 8.(via YouTube):

The crowd erupted at the entrance of Former UFC Champion which made Rousey emotional.Former UFC Heavyweight Champion Cain Velasquez,UFC Champion Daniel Cormier and #9 ranked Lightweight Contender Michael Chiesa were in the attendance and showed full support to Rousey.(via Twitter):

Ronda Rousey is talking on the mic for the first time at a WWE event. She is brought to tears as the crowd chants her name. Cormier, Velasquez, Chiesa are seen in the front row chanting, “Ro-nda Rou-sey!"

Ronda Rousey made her WWE debut at the 2018 Royal Rumble, and it was announced just moments after the show went off the air that the former UFC bantamweight champion has indeed signed a full-time contract with WWE.

Rousey faced Holly Holm in her penultimate fight at UFC 193 on November 15, 2015.Despite being a heavy betting favorite, Rousey was unable to get Holm to the ground and had no answer for Holm’s superior striking. Early in the second round, Holm knocked Rousey out with a high kick to the neck, ending Rousey’s three-year reign as champion.

She was also medically suspended by UFC on November 18, 2015, which included a no-contact suspension for 45-days, and no fights for 60-days, and would have to depend on CT scan results to have the suspension reduced.She was medically cleared on December 9, 2015.

In her final fight,Rousey faced current champion Amanda Nunes on December 30, 2016, in the main event at UFC 207.She lost the fight via TKO due to punches at just 48 seconds into the first round,which seems to have further led her to the decision of signing with the WWE.

Previous article
Boxing News: Scott Westgarth dies due to injuries sustained in a bout
Next article
UFC: Dana White says he won’t allow Chuck Liddell to fight in the UFC because he ‘loves him’