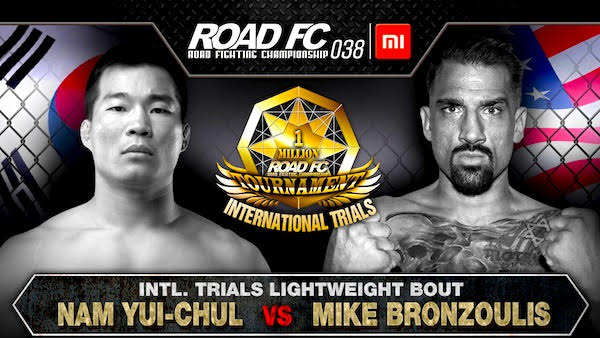 Nam Yui-Chul (18-6-1, Sanae Nam MMA) As one of the first generation of Korean fighters, Nam won the Spirit MC 70kg title in 2006, then ground his way through opposition in M-1 and Legend FC, where he fought Jadamba Narantungulag for the belt. Back in ROAD FC in 2013, he then tore through the Lightweight Tournament to become the Champion, defending once successfully. Against Kazuki Tokudome in the UFC, Nam won Fight of the Night Honors. Following a 3-fight tour in the UFC, the former ROAD FC Lightweight Champion finally returns home.

Mike Bronzoulis (18-9-1, Paradigm Training Center) is the last Legacy FC Lightweight Champion as well as the former LFC belt holder at welterweight. In his ten-year career, Bronzoulis competed in Strikeforce and Bellator, where he ended up as a finalist on the TUF predecessor Fightmaster on Spike TV. His extensive training in the standing arts has made him a threat standing with 65% of his wins by KO, but his size and power at lightweight allow him to crush his opponents wherever he wants.

Nam versus Bronzoulis will be two tough-as-nails fighters colliding head on in what promises to be a brutal grinder of a match!

As previously announced, for the International Trials on Xiaomi ROAD FC 038, ROAD FC fan favorites Bruno Miranda and Nandin-Erdene will face each other in a striker’s dream match up.