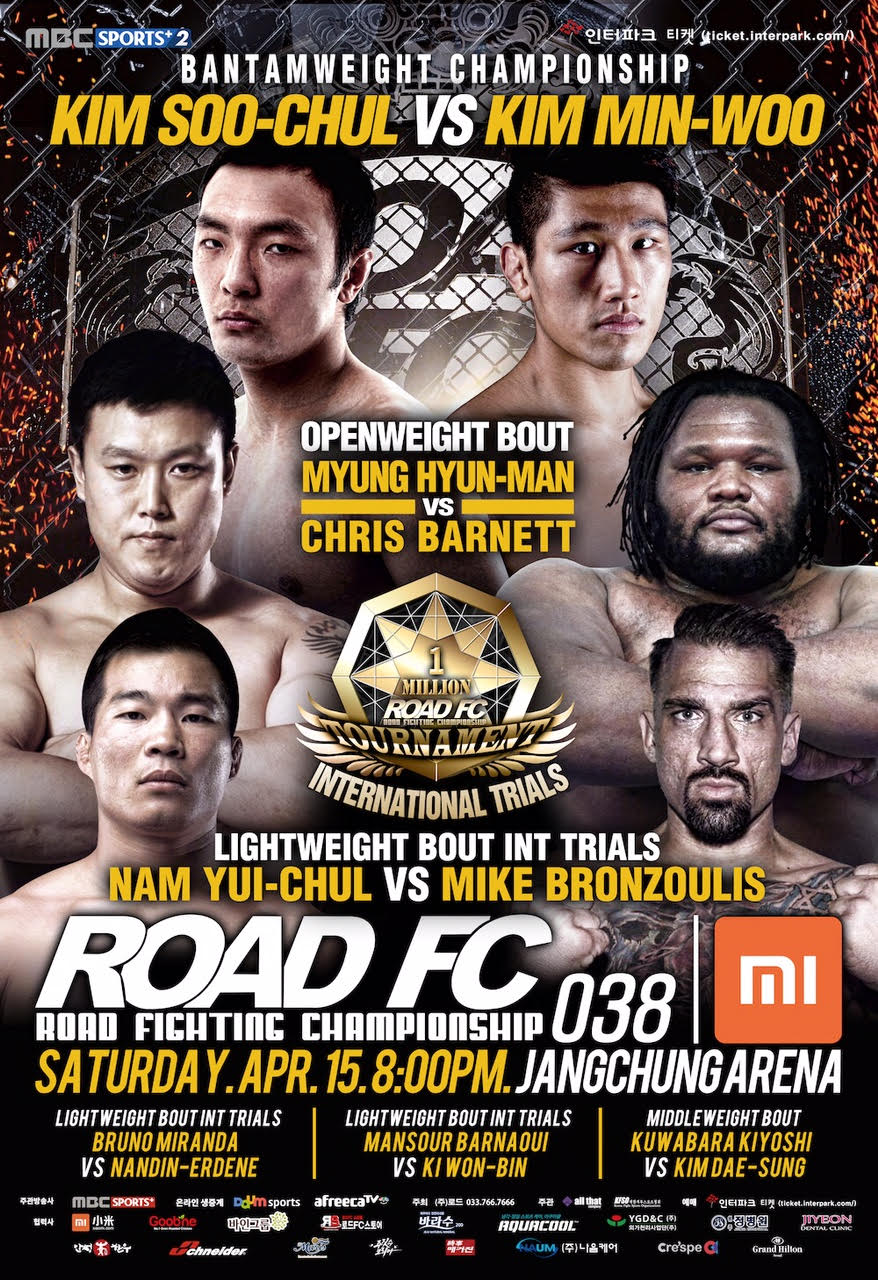 As previously announced for the main event of Young Guns 33, “Crying Fist” alumnis Park Hyun-Geun and Jang Dae-Young face off. Both proven that their grappling and striking are equally impressive, so their match up will be a turning point for the two up and comers.

In the China Trials for the $1 Million Lightweight Tournament, finalists Shang Lianru (5-5, Guangdong Glory Fight Club) and Amartuvshin Khuukhenkhuu (4-3, Shiren Beelii) will face one another for the right to be seeded. Shang made a huge statement in his opening match by blasting Nuertiebieke Habetihan with punches that knocked him down, then followed up with pounding to get the fast win.

Khuukhenkhuu defended the shoots of Rodrigo Caporal, and mounted a striking comeback, so including Caporal’s penalties for missing weight, Khuukhenkhuu got the decision. Shang versus Amartuvshin is a contrast of styles and experience, as the 18-year old Chinese striker takes on the sambo and judo standout from Mongolia.

A fast-paced flyweight match is set between Yoo Jae-Nam (4-6, Team Force) and Jeong Won-Hee (debut, Ssen Gym). Yoo has faced many strong Japanese opponents: he went the distance against former Shooto champ and UFC vet Yasuhiro Urushitani, had an upset win over Shooto champ Mikihito Yamagami, and faced DEEP champ Tatsumitsu Wada. Yoo’s recent record of 3 losses in a row makes him hungry to fight on home soil again and change his luck.

Jeong will make his professional MMA debut following a kickboxing career record of 9-5. His transition to MMA was made in the amateur ROAD FC Attack League where he went a respectable 6-1-1. Jeong’s chance on Young Guns was granted by winning the Attack League flyweight tournament held in February. Yoo versus Jung will be a fast-paced bout between exciting fighters who look for the finish.

Kim Kyung-Pyo (6-1, MMA Story) and Jin Tae-Ho (2-3, Ronin Crew) will meet each other at lightweight. Kim is coming off an excellent win over former Pancrase and Gladiator champ Yamashita Gota. He is a well-rounded prospect from the gym with two ROAD FC champs: Cha Jung-Hwan and Choi Mu-Gyeom.

Jin is coming off a loss in DEEP against one of the best strikers in Japan, Juri Ohara, but by going the distance he proved that he is developing into a well-rounded fighter. Jin has a strong jiujitsu game that has earned him 2 submission finishes. Kim versus Jin is a test for both fighters to see which young prospect will climb higher towards a main card match.

In another lightweight match, Choi Jong-Chan (1-3, Team J) and Jo Gyeong-Eui (0-2, Team Poma) young fighters look to make a mark. Choi is a judoka who was also a contestant on “The Crying Fist” MMA reality show. Jo went 3-0 in the amateur ROAD FC Central League with all submission finishes. This match will be hot as both fighters desperately need the win.

Also at lightweight is a match between Park Chan-Sol (3-0, Blacklist) and Lim Byeong-Ha (0-4, Team Finish). Park’s respectable 3-3 in the amateur ROAD FC Into League transitioned him into pro MMA, and after recovering from injury for a year, he now returns. Lim also transitioned from amateur MMA through the ROAD FC Central League where he won the lightweight tournament. Park will knock off the cage rust while Lim is looking for his first professional win.

Lee Yoon-Jin (1-2, Team Posse) and Hong Sung-Bin (0-1, Team Hon) will open up the Young Guns 33 card. Lee is a 20-year old prospect with strong wrestling and heavy hands, and he went undefeated in the amateur ROAD FC Central League. Hong is a 19-year old who went 3-3 in the amateur ROAD FC Attack and Into Leagues, making an impressive pro debut by going the distance with Shooto veteran Yuki Yamamoto. These bantamweights are the definition of Young Guns.

**Please note: attached is the new poster, updated from a typographical error**

As previously announced to headline Xiaomi ROAD FC 038, two of Asia’s best bantamweights will face each other for the ROAD FC Bantamweight title. Korean #1 ranked phenom Kim Soo-Chul and #2 ranked ultra prospect Kim Min-Woo will face each other for the vacant belt. Co-main event Myung Hyun-Man versus Chris Barnett in an openweight bout will show the high level striking that the big men can bring. Plus, Kuwabara Kiyoshi and Kim Dae-Sung ride impressive victories into their opening middleweight match.

Live in Korea on MBC

Live in Japan on Abema

Live in China on CCTV 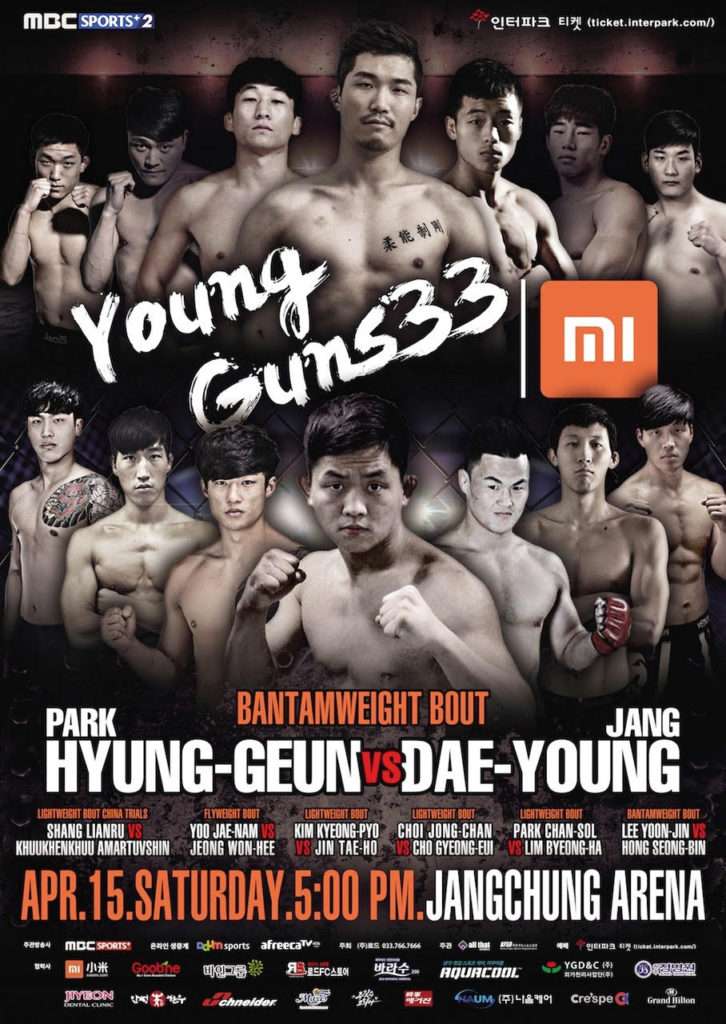