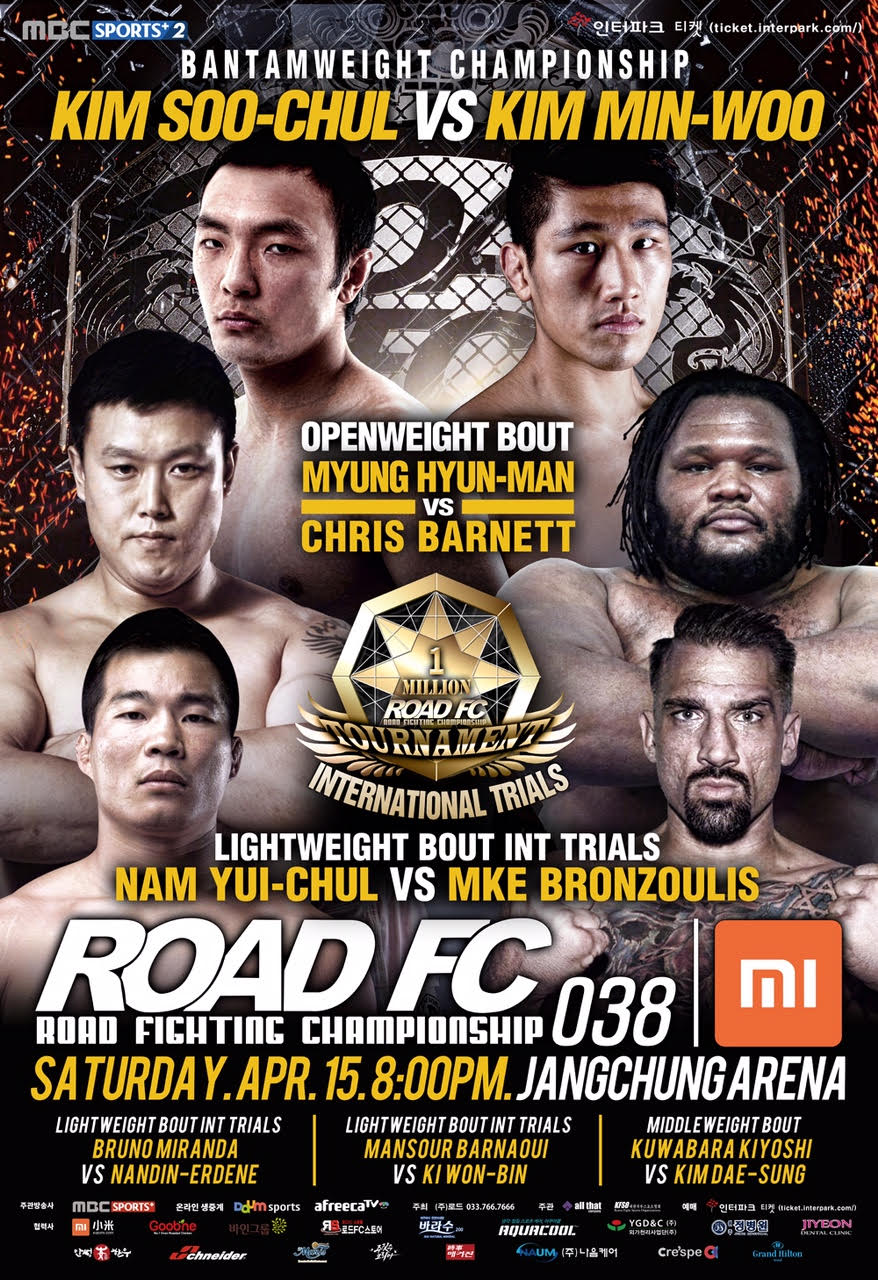 Myung Hyun-Man (3-3, Team Gangnam/Apgujeong Gym) is a heavyweight Muay Thai standout of over 30 wins who transitioned to MMA in 2013. He KOed Liang Lingyu in the 2015 ROAD FC Openweight Tournament quarterfinals and met Mighty Mo in the semis. The fight nearly went the distance with a thrilling stand up display from both knockout artists, but Mo got the submission win on the canvas in the third. It was a repetition – if unpredictable – result when Myung met Cro Cop in RIZIN. Now he’s ready to redeem himself in the cage once more.

Chris “Huggy Bear” Barnett (15-3, Barnett Taekwondo Academy) is one of the toughest men to hit the Asian MMA scene in the last 3 years. In his US career he KOed Kenny Garner and Travis Wiuff amongst others his 90% knockout finish stats. Barnett’s only losses were to Eric Prindle, Oli Thompson, and a contentious split to Kirill Sidelnikov in RIZIN. Barnett is going to show Korea what a Taekwondo background can accomplish for a heavyweight fighter.

As previously announced to headline Xiaomi ROAD FC 038, two of Asia’s best bantamweights will face each other for the ROAD FC Bantamweight title. Korean #1 ranked phenom Kim Soo-Chul and #2 ranked ultra prospect Kim Min-Woo will face each other for the vacant belt. Plus, Kuwabara Kiyoshi and Kim Dae-Sung ride impressive victories into their opening middleweight match.

In the main event of the preliminary card, “Crying Fist” alumnis turned pro face each other. Park Hyun-Geun and Jang Dae-Young have both proven that their grappling and striking are equally impressive, so their match up will be a turning point for the two up and comers.

Previous article10 Martial Arts Quotes to Live By, If You Want to Succeed in Mixed Martial Arts
Next articleJimi Manuwa: The Boxers are afraid of us