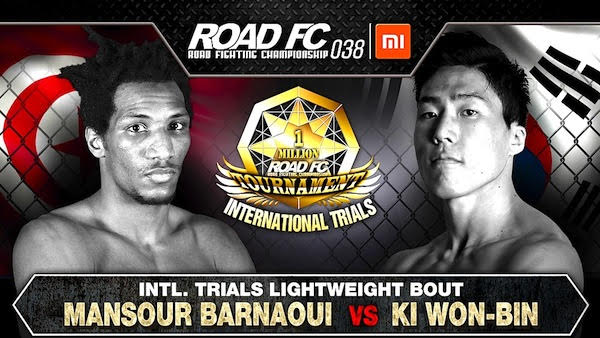 March 15, 2017 – ROAD Fighting Championship announces Mansour Barnaoui versus Ki Won-Bin as the next bout in Group B of the International Trials for the $1 Million Tournament. The match will take place at Xiaomi ROAD FC 038 on April 15, 2017 in the Jangchung Arena in Seoul, South Korea.

Mansour Barnaoui (13-4, Team Magnum) is a Tunisian phenom who went pro in 2011 and since then has finished all but one opponent while earning the BAMMA Lightweight belt and the M-1 Challenger Lightweight Championship in the process. He is a pinpoint aggressive striker who loves the clinch and has a tenacity that has worn down the best.

Ki Won-Bin (6-2, Team Posse) won his reserve match for the Trials with a one minute KO. He has made a name for himself in ROAD FC as an intelligent and tough striker, as well as taking on opponents overseas in Gladiator and The Outsider. Now Ki takes on his biggest challenge to date in his quest for the $1 Million Tournament.

Mansour Barnaoui versus Ki Won-Bin will definitely be a fight for the quickest KO, but will grappling change the equation?

As previously announced for the International Trials on Xiaomi ROAD FC 038, former ROAD FC Lightweight Champion Nam Yui-Chul will take on Legacy FC Champion Mike Bronzoulis, and ROAD FC fan favorites Bruno Miranda and Nandin-Erdene will face each other in a striker’s dream match up.

Previous articleUFC 210: Extended Preview
Next articleGastelum gets Anderson at UFC 212