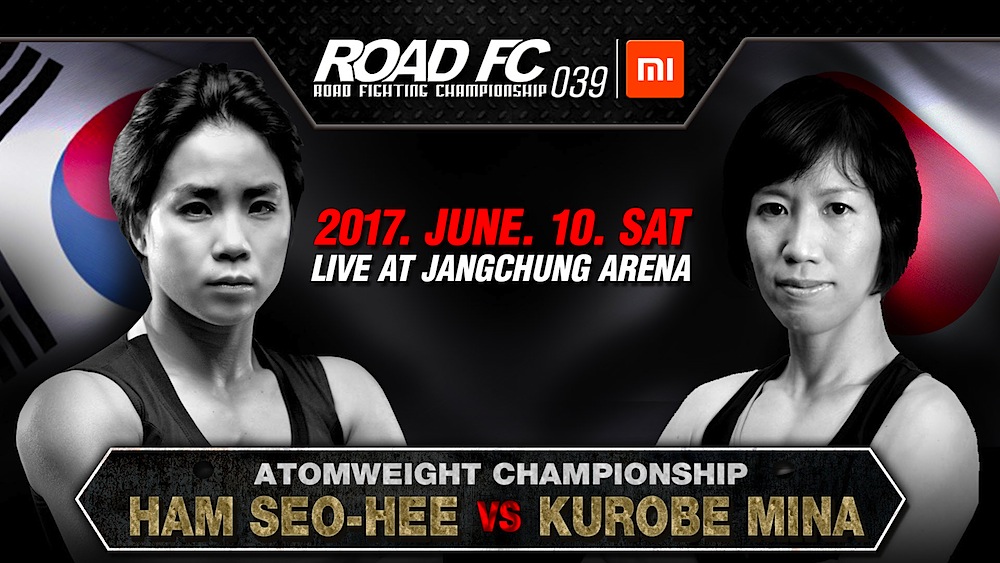 April 25, 2017 – ROAD Fighting Championship announces that Ham Seo-Hee will return to her home of South Korea to fight for the inaugural ROAD FC Women’s Atomweight Championship against Kurobe Mina, the current DEEP -48kg Champion. The match will be the main event for Xiaomi ROAD FC 039 which will take place on June 10, 2017 in the Jangchung Arena in Seoul, South Korea.

Xiaomi ROAD FC 039 was previously announced for May 20 with the main event being the Middleweight title rematch between Champion Cha Jung-Hwan and Choi Young, but Cha has torn his shoulder and will need lengthy rehabilitation. Therefore, due to injuries on the card, Xiaomi ROAD FC 039 will be moved to June 10. The next ROAD FC XX all women’s event will be announced at a later date.

Ham Seo-Hee (17-8, Team MAD) is the pioneer for women’s MMA in South Korea. She made her professional MMA debut 10 years ago in Deep 28 Impact against Hisae Watanabe, won by decision, and became a new force in women’s MMA.

Ham has fought the best in the 48 and 52 kg divisions, against the likes of Mei Yamaguchi, Emi Fujino, Naho Sugiyama, Megumi Fujii, and Ayaka Hamasaki. She became the Deep Jewels Featherweight Champion and was picked up by the UFC, making history as the first female fighter from South Korea in the promotion. Finally, Ham will be fighting for her first title on home soil in ROAD FC.

Kurobe Mina (10-2, Master Japan) is the current DEEP Jewels Atomweight Champion. Having fought exclusively in Jewels since her relatively late start to MMA in 2012, she’s racked up an impressive career and set her self to be top 10 in the world for female atomweights. Her current 5-fight win streak includes a dominating victory over hot prospect Ishioka Saori, and a revenge match against one of her only 2 losses in which she took the DEEP Jewels belt from Sugiyama Naho.

At the beginning of her career, Kurobe put herself on the map when she submitted grappling prospect Takano Satomi, and decisioned much more experienced opponents Yoshida Masako and Tomimatsu Emi. Her game is well-rounded, tough in the clinch and ground and pound. Kurobe has proven her stamina and power.

Women’s MMA is growing strong in Asia, and the ROAD FC Atomweight Championship between Ham Seo-Hee and Kurobe Mina promises to showcase not only two of the best fighters in Asia, but two of the best in the world!