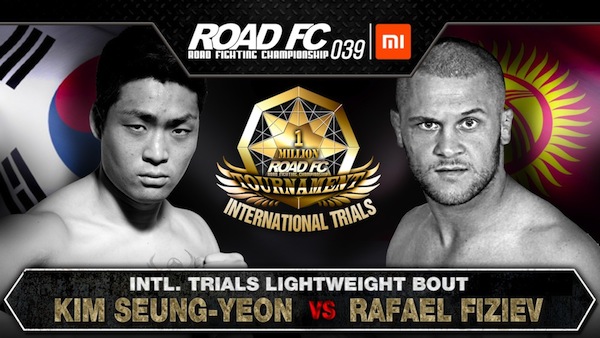 ROAD Fighting Championship announces that the final International Trials match for the ROAD FC $1 Million Lightweight Tournament will be a match between Kim Seung-Yeon and Rafael Fiziev at Xiaomi ROAD FC 039 on June 10, 2017 in the Jangchung Arena in Seoul, South Korea.

“Keyboard Warrior” Kim Seung-Yeon (2-1, Ssabi MMA) gained popularity even before the start of his professional MMA career by putting his words into action in Season 4 of the MMA reality show “Crying Fist”. Kim comes from a karate background since childhood, winning the Japan Junior Kyokushin Karate competition, and placing 5th in the World Kyokushin Karate Championship.

Kim started in ROAD FC with an equally strong impression by getting back to back KOs over Nandin-Erdene and Jung Doo-Jae, and although he lost to Bruno Miranda, he remains a fan favorite for his thrilling striking. Kim was originally set to face Melvin Guillard, but the well-known veteran could not fulfill his contract and the bout was scrapped.

Fiziev’s MMA career is following a similar path as he holds all first-round finishes including a pair of knockouts and one submission. Most recently, a video of him went viral when he used a move straight out of The Matrix to dodge a high kick from Sorgraw Petchyindee at the Toyota Marathon in Thailand.

Kim versus Fiziev for an International Trials bout sees two up and coming amazing strikers from wildly different backgrounds earn a chance to claim history in their young MMA careers.

As previously announced for the main event, Ham Seo-Hee will return to her home of Korea to fight for the inaugural ROAD FC Women’s Atomweight Championship against Kurobe Mina, the current DEEP -48kg Champion. Also, an openweight match will kick off the main card as wrestler Shim Yoon-Jae faces kickboxer Kim Chang-Hee.

La In-Jae versus Cha In-Ho in a match which is a contrast of styles will be the main event for the preliminary Young Guns 34 card.