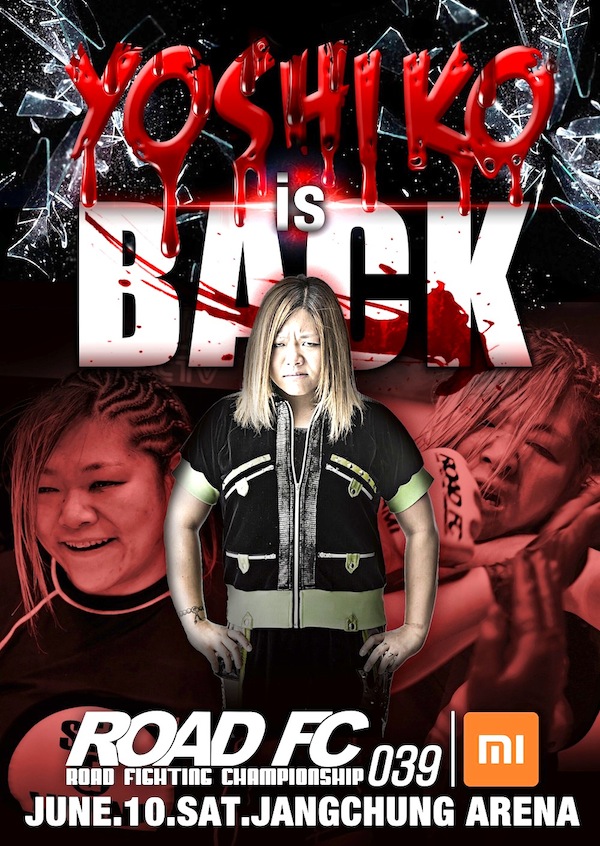 May 15, 2017 – ROAD Fighting Championship announces that professional wrestler Yoshiko will return to fight MMA at Xiaomi ROAD FC 039 in Seoul, Korea on June 10, 2017.

Hirano Yoshiko (1-0, SEAdLINNNG), started her pro wrestling career at only 17 years of age. She was awarded as a rookie and for her outstanding performances, as well as winning numerous pro-wrestling Championships. But when Yoshiko beat an opponent so badly that she needed surgery which ultimately ended her pro wrestling career, Yoshiko’s villain persona in the ring tragically came true to life.

So, the notorious Yoshiko was given the opportunity to focus her aggressive tendencies in the sport of MMA.  At ROAD FC 036, Yoshiko made an astounding debut with a first-round knockout of Chun Sun-Yoo. She was momentarily overjoyed at proving herself in MMA, but she quickly resumed her game face. Yoshiko said,

“There’s nobody strong enough to beat me in professional wrestling. So I’m going to come back to MMA.”

Yoshiko’s opponent for Xiaomi ROAD FC 039 will be announced shortly.

As previously announced for the main event, Ham Seo-Hee will return to her home of Korea to fight for the inaugural ROAD FC Women’s Atomweight Championship against Kurobe Mina, the current DEEP -48kg Champion. Openweight strikers Myung Hyun-Man and Aorigele will finally meet, and unfinished business will be settled. Also, Moon Jea-Hoon versus Asakura will exemplify a striking match at its finest as Taekwondo takes on Karate.

“Keyboard Warrior” Kim Seung-Yeon will finally have his match in the International Trials for the $1 Million Lightweight Tournament against surging Kyrgyzstani kickboxer “Ataman” Rafael Fiziev. Also, an openweight match will kick off the main card as wrestler Shim Yoon-Jae faces kickboxer Kim Chang-Hee.

The main event for the preliminary Young Guns 34 card will be La In-Jae versus Cha In-Ho in a match which is a contrast of styles. Also, two undefeated prospects Kim Se-Yeong and Lee Jeong-Yeong are sure to deliver an exciting match.

Previous articleUFC 211 Reactions: The Baddest Man On The Planet
Next articleMMA India ties up with Krunch Today