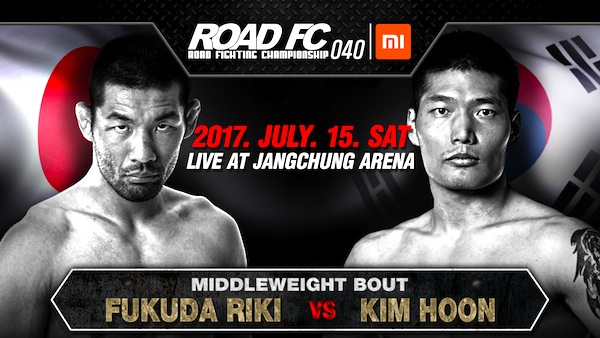 May 10, 2017 – ROAD Fighting Championship announces that Xiaomi ROAD FC 040 will take place on July 15, 2017 in the Jangchung Arena in Seoul, South Korea. The previously postponed middleweight bout between Fukuda Riki and Kim Hoon will feature on this event.

Kim Hoon (9-11-2-1, Team Fighter) is a first generation Korean fighter since 2004, having competed in Gimme Five, MARS and Spirit MC. In Pancrase and Legend FC he faced stiff international competition including Daiju Takase, Robert Whittaker, and Keita Nakamura. Kim joined ROAD FC and faced Minowaman in his 100th fight and lost by KO, but he claimed retribution with an amazing 3 round war against UFC vet Luis Ramos.

Fukuda and Kim were originally set to meet at ROAD FC 032, but an injury to Fukuda delayed the match, and Kim desired to wait for his opponent. Both veterans present completely opposite styles of striking and grappling, so this match should produce thrilling and unpredictable mayhem.

The next event will be Xiaomi ROAD FC 039 on June 10 in Seoul. As previously announced for the main event, Ham Seo-Hee will return to her home of Korea to fight for the inaugural ROAD FC Women’s Atomweight Championship against Kurobe Mina, the current DEEP -48kg Champion. Also, an openweight match will kick off the main card as wrestler Shim Yoon-Jae faces kickboxer Kim Chang-Hee.

Also, “Keyboard Warrior” Kim Seung-Yeon will finally have his match in the International Trials for the $1 Million Lightweight Tournament against surging Kyrgyzstani kickboxer “Ataman” Rafael Fiziev. The main event for the preliminary Young Guns 34 card will be La In-Jae versus Cha In-Ho in a match which is a contrast of styles.