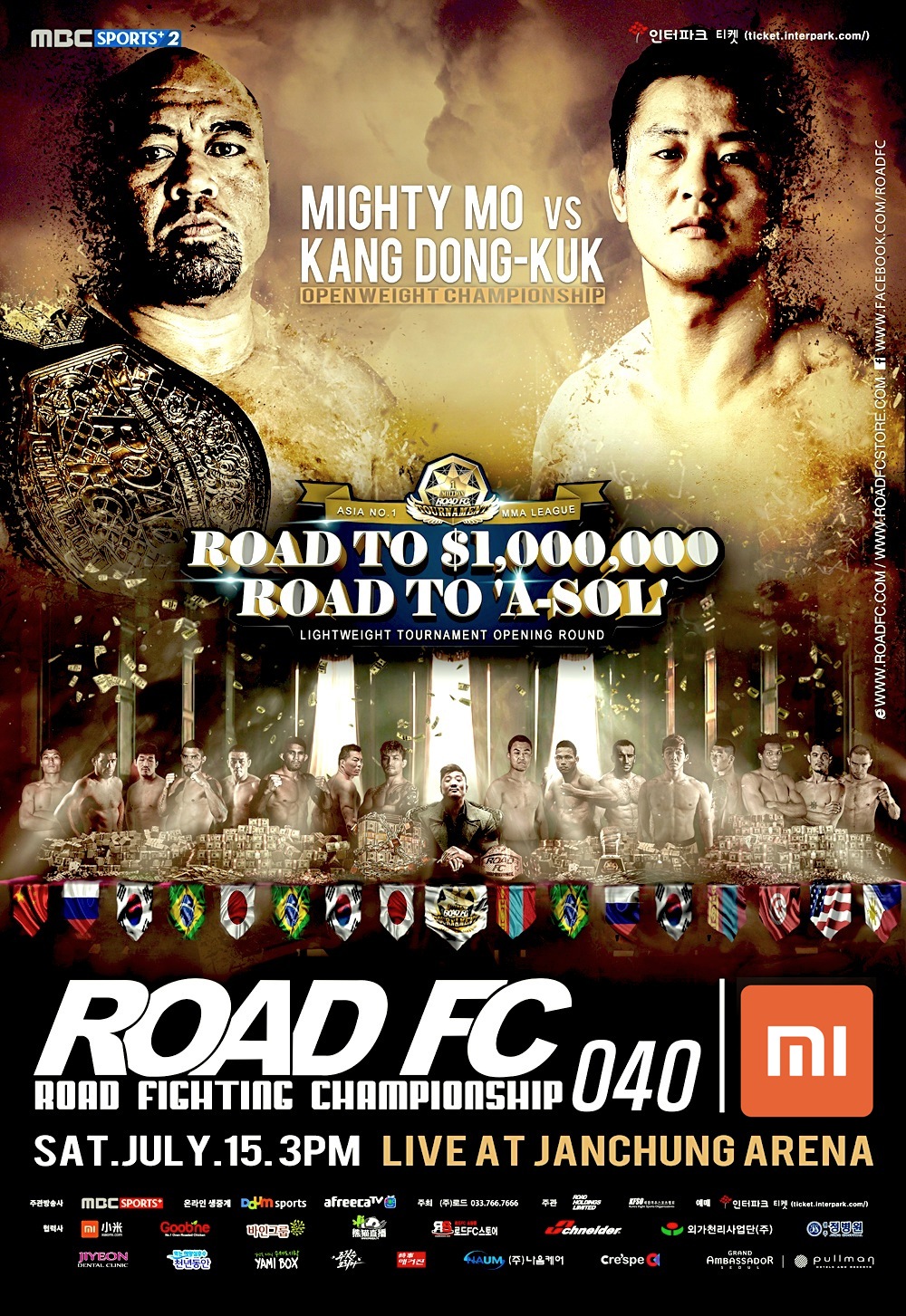 The Main Event for Xiaomi ROAD FC 040 will be Openweight Champion Mighty Mo making his second title defense against Kang Dong-Kook in what is sure to give the fans of hard-hitting heavies a match worth remembering.

Shinji Sasaki vs Amartuvshin Khuukhenkhuu: Former Shooto Champ Sasaki is a grappler with KO power, and former MGL-1 Champ Khuukhenkhuu is a judoka and sambo fighter, so the tone of this match is very unpredictable.

Tom Santos vs Nam Yui-Chul: Dragonfight Champ Santos made a huge entrance when he KOed former ROAD FC Champ Nam Yui-Chul in their International Trials bout, but since final seed Rafael Fiziev broke his hand, Nam gets a chance to avenge his loss and his reputation.

Ronys Torres vs Elnur Agaev: Shooto Brasil Champ Torres likes to show off his superb technique to get a finish, and MFP warhorse and Russia Trials winner Agaev uses his grinding strength for the same, so this will definitely be an interesting style versus style bout.

Shimoishi Kota vs Park Dae-Sung: Former DEEP title challenger and Japan Trials winner Shimoishi is at the top of his career while hot prospect Park is just coming into his, and both are facing the most important fight of their lives.

Shamil Zavurov vs Leo Kuntz: Former M-1 Champ Zavurov is technical and tough whereas former Impact FC Champ Kuntz is an unorthodox finisher; both men are both well-rounded fighters that will deliver an exceptional match.

Red Romero vs Baoyincang: Former URCC Champion and SEA Trials winner Romero and China National Sanda Champ Baoyincang are two of the region’s most unsung heroes who finally have a chance to prove their worth in an international Tournament of epic proportions.

Riki Fukuda versus Kim Hoon will finally meet in a clash of opposite styles. Champion boxer Raika Emiko will take on champion Taekwondo fighter Kim Hae-In in a Women’s flyweight bout. Two Tournament Reserve matches will take place: Jung Doo-Jae vs Alexander Merezhko and Lee Hyung-Seok vs Park Hae-Jin. Opening the card will be a middleweight match between Lim Dong-Hwan and Kim Ji-Hoon.

Broadcast on CCTV in China TBA

Previous articleUFC 213 Free Fight: Amanda Nunes vs Miesha Tate
Next articleWoodley vs Maia is a go for UFC 214