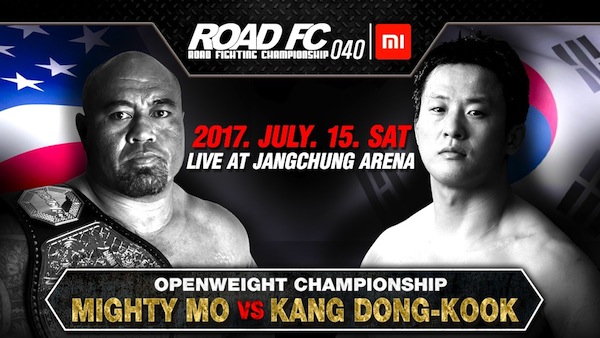 Siala “Mighty Mo” Siliga (11-5, Millennia MMA) is the reigning ROAD FC Openweight Champion who defeated all his opponents in the 2016 Tournament and eventually three-time rival Choi Hong-Man to win the belt. Since then, he has successfully defended his title once against Carlos Toyota by way of a highlight-reel knock out in just over a minute.

Kang Dong-Kook (0-1, Team Paradise) is the next Korean heavy to step into the cage against the Champion. He has a lengthy career as a wrestler, having been on the Korean National team from 1999 to 2002, winning numerous national competitions ad competed in the Asian Games. Kang fought MMA once in 2012 at ROAD FC 10 where he took the massive veteran Jeff Monson a full three rounds to decision.

Openweight Champion Mighty Mo versus challenger Kang is sure to give the fans of hard-hitting heavies a match worth remembering!

Also on Xiaomi ROAD FC 040, Riki Fukuda versus Kim Hoon will finally clash. These two veterans present completely opposite styles of striking and grappling, so this match should produce thrilling and unpredictable mayhem.

The next event will be Xiaomi ROAD FC 039 on June 10 in Seoul. As previously announced for the main event, Ham Seo-Hee will return to her home of Korea to fight for the inaugural ROAD FC Women’s Atomweight Championship against Kurobe Mina, the current DEEP -48kg Champion.