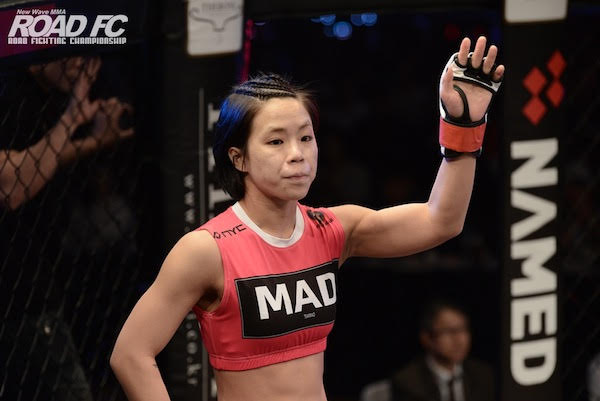 April 3, 2017 – ROAD Fighting Championship announces that the second all-female MMA card Xiaomi ROAD FC 040 XX will take place on June 11, 2017 in the Grand Hilton Convention Centre in Seoul, South Korea. The Main Event will be the return of Ham Seo-Hee to her home of Korea to fight for the inaugural ROAD FC Women’s Atomweight Championship.

Ham Seo-Hee (17-8, Team MAD) is the pioneer for women’s MMA in South Korea. She made her professional MMA debut 10 years ago in Deep 28 Impact against Hisae Watanabe, won by decision, and became a new force in women’s MMA.

Over the next 7 years, Ham racked up an impressive record of 12-5 fighting at 48 and 52 kgs, and earned wins over the likes of Mei Yamaguchi, Emi Fujino, and Naho Sugiyama. Ham has only been finished twice in 10 years: by the legendary Megumi Fujii and Invicta Atomweight champ Ayaka Hamasaki.

Ham debuted in ROAD FC in 2014 and won back to back matches against Alyona Rassohyna and Shino VanHoose. Next she claimed Deep Jewels Featherweight title from Saori Ishioka. Then Ham was picked up by the UFC and made history as the first female fighter from South Korea in the promotion. She made her debut in one of the greatest strawweight fights of all time against Joanne Calderwood. Ham went 1-3 with the promotion with her last back to back losses being widely proclaimed as massive robberies by the judges.

Now Ham will once again be fighting live in her home of Korea, and will again make history by competing in the first ROAD FC Women’s Atomweight Championship match.

Xiaomi ROADFC 038 will take place on April 15 at the Jangchung Arena, headlined by a battle of two of Asia’a best as Kim Soo-Chul and Kim Min-Woo face off for the Bantamweight Championship. Also, Group B of the International Trials for the ROAD FC $1 Million Lightweight Tournament will take place, including Nam Yui-Chul vs Mike Bronzoulis, Bruno Miranda vs Nandin-Erdene, and Mansour Barnaoui vs Ki Won-Bin. A special openweight match between giant Muay Thai specialist Myung Hyun-Man and entertaining KO artist Chris Barnett will also be featured.

Xiaomi ROADFC 039 will take place on May 20 at the Jangchung Arena in Seoul. The Middleweight Title rematch between champion Cha Jung-Hwan and Choi Young “Ryo” will take place. After Cha defended his title against Ryo, an uproar was heard about his cage grabbing, so a rematch was issued immediately.